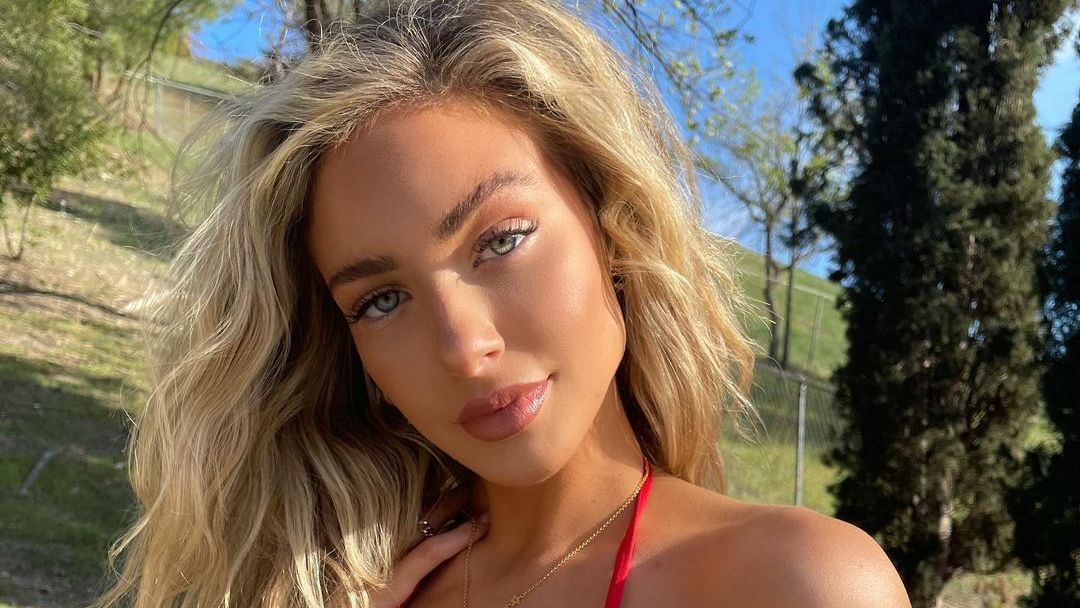 Blond bombshell Hannah Palmer tantalized her 1.8 million Instagram followers with her most recent share, a double update in which she rocked a pale pink dress that showcased her curves to perfection.

The look was from the brand Revolve, and Hannah tagged the company's own Instagram page in the caption of the post as well as in the first slide, in case her fans were interested in picking up the look.

The pictures were taken outdoors, in front of a set of pale pink double doors with a farmhouse vibe that added a unique backdrop to the shots.

The first image was taken from a closer perspective, capturing Hannah's curvaceous figure from her hips up.

Her dress was a soft blush pink hue that contrasted beautifully against her bronzed skin. The neckline dipped low, showing off a tantalizing amount of cleavage, and super thin spaghetti straps extended over her shoulders, leaving her slender arms bare.

The piece had seams underneath her breasts and the remainder of the torso had a simple silhouette, with the silky fabric clinging to her slim waist.

The dress also had a strip of white lacy fabric that stretched from her cleavage all the way down the front of the piece, accentuating her curves even more.

Hannah's blond locks were parted on the side and styled in voluminous, tousled waves that gave her an effortlessly gorgeous look.

She paired the dress with a necklace on a delicate chain with a sweet heart-shaped pendant, and had her hands tucked behind her back as she gazed at the camera with her piercing blue eyes.

The second image was taken from further away, capturing more of the look.

The straps were embellished with delicate bows just above where they attached to the cups of her dress, and the silky fabric draped over her figure, clinging without hugging her curves too tightly.

The hem landed below her knee, but the garment had a scandalously high slit on one side that showcased her toned thigh as she held her dress up.

She kept her gaze focused on the camera as she posed for the steamy shot, and her fans couldn't get enough.

"The most beautiful woman on the planet," one fan wrote.

"Such a cute dress," another follower chimed in.

"Spectacular," a third remarked, including a trio of flame emoji in the comment.

Hannah loves to showcase her ample assets, to the delight of her audience. Earlier this month, as The Inquisitr reported, she stunned her followers with an update in which she rocked a barely-there black corset that could hardly contain her curvaceous figure.