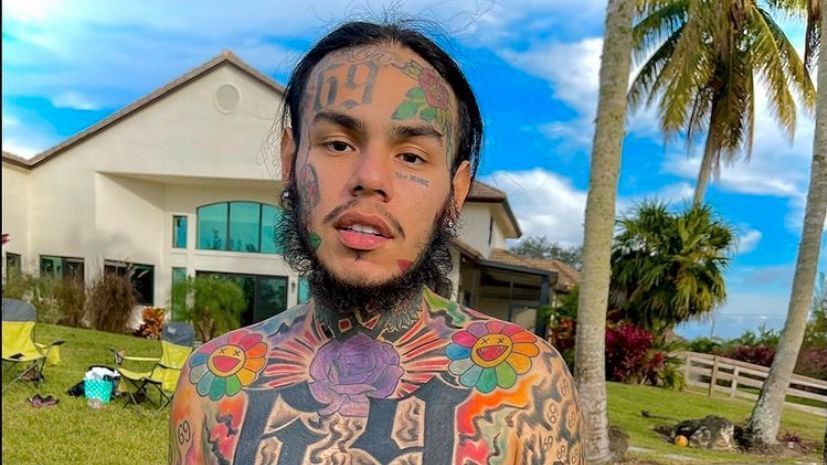 Tekashi 6ix9ine is being told he can't drive. The rainbow rapper, currently gearing up for a Trillerfest performance in Miami, FL, today clocked over 2.2 million views in under 45 minutes for aggressively driving around in a multicolor and paint-splattered Lamborghini, with fans of the "GOOBA" star seemingly not impressed with his driving skills. A video shared to 6ix9ine's Instagram on Thursday came with explicit language, but talk in the comments section was about the former gangster being behind the wheel.

You Know Where To Find Him

Scroll for the video, one that came with action, plenty of color, and the rapper, born Daniel Hernandez, pumped for his show. Filmed on a narrow road and swinging the Lambo's door open, 69 addressed fans telling them he'd be performing in front of "50,000." He added that fans have "no f-cking excuses. You looking for me? You know where to find me."

"MIAMI THIS SATURDAY 🌈🌈 MARINE STADIUM YOU LOOKING FOR ME IM THERE @triller @bobbysarn," Tekashi captioned the video.

Scroll For The Wild Video

Then putting his foot to the gas, Tekashi was seen zooming off. The comments section is now both poking fun at the rapper's criminal history - he is fresh from  ending a two-year prison stint that finished off with a house arrest on account of coronavirus - and, it would seem, his driving skills.

"Yb drive better," one fan wrote, with a hugely-popular comment reading: "Bro y’all almost crashed wtf 😂😂." While one fan commented on the rapper's driving skills, another asked: "What driving skills?" See more after the video.

A user even stated that 69 sat in his "cell" better, although not all were prepared to see the star trashed. "Let me put u behind a 750hp traction control lamborghini and floor it see how well u do fam," one replied, with another defending the "TROLLZ" rapper as they wrote:

"It’s a lambo not a Honda Civic😂 super cars aren’t as easy to drive because they’re 10x faster."

The video comes three days after the rapper officially announced his Trillerfest appearance. More photos below.

Tekashi took to Instagram three days ago, posting a promo photo and announcing his Miami Marine Stadium appearance on May 1. Tickets are on sale, with the rapper writing:

"THEY SAID HE CANT DO NO SHOWS IN AMERICA 😂😂😂 THIS SATURDAY MIAMI 🌈🌈 MIAMI MARINE STADIUM 🎥 THE BEST PERFORMANCE YOU HAVE EVER SEEN ‼️ SEE YOU THERE."

Elsewhere, Tekashi remains in the news for his massive 60-pound weight loss, this coming with a video (seen below) and admission that he was tipping the scales at over 200 pounds prior to shedding the weight.