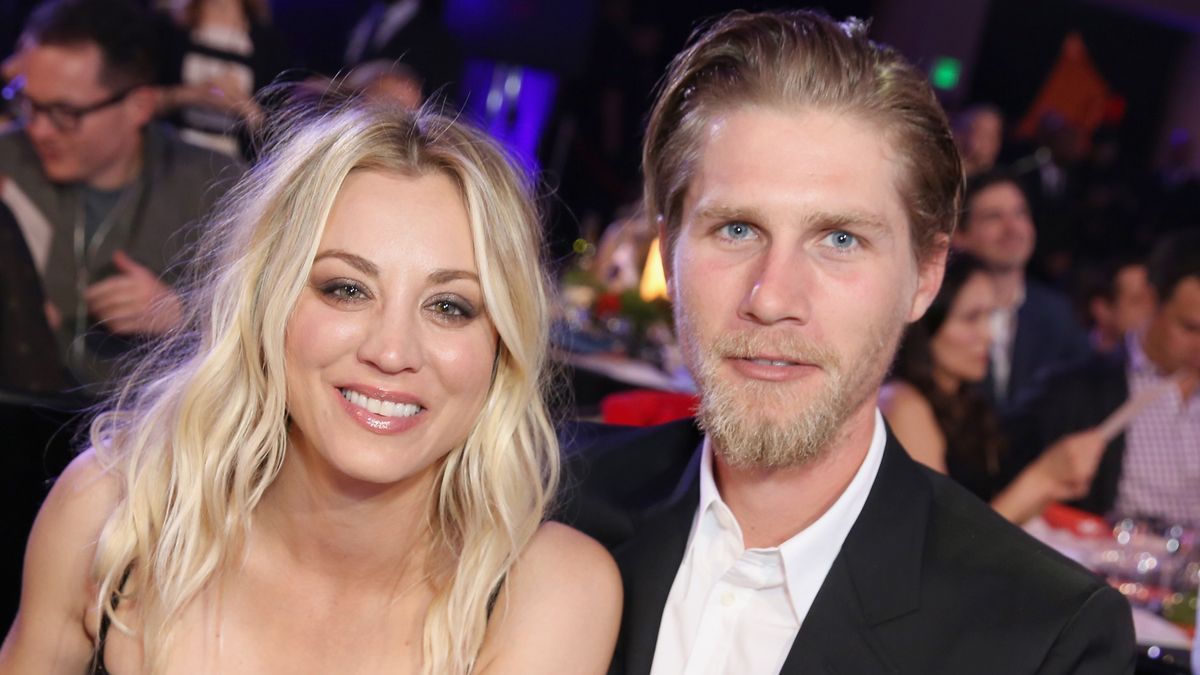 Kaley Cuoco has one sneaky spouse! Her husband, professional equestrian and billionaire heir Karl Cook, has a habit of sharing somewhat embarrassing photos and videos of herself on social media, and he does so without asking her first.

On Wednesday night, Karl took to his Instagram stories to give his followers an inside look at what life is like with Kaley. He poked fun at the outfit that she chose to cook dinner in, and he deemed her behavior in bed to be a bit odd. He provided video evidence to back up his latter observation. Check it out below! 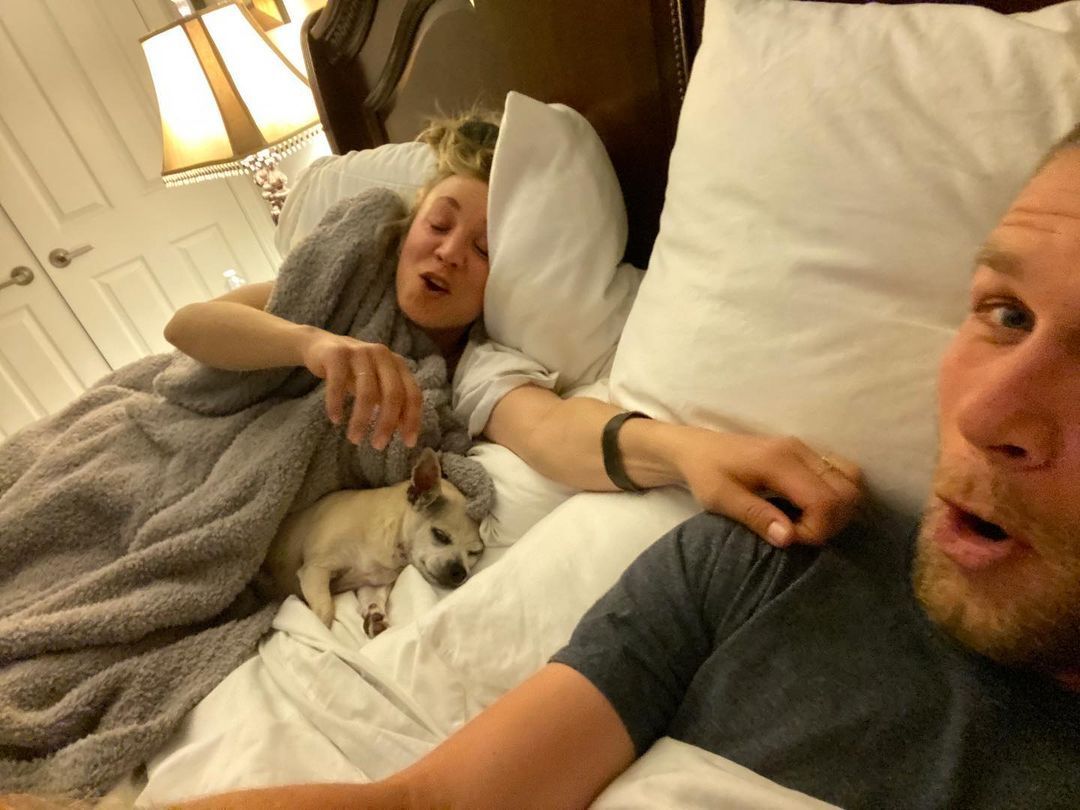 Karl captioned his video, "Weird things happen in our bed at night." He had filmed Kaley interacting with the couple's elderly rescue dog, an adorable chihuahua named Dumpy, which is short for "Dump Truck." Kaley previously revealed that the lucky canine was a "foster fail."

Kaley looked cozy and casual in a grey sweat top with her blond hair pulled up in a messy topknot. Dumpy, meanwhile, was wrapped up in a blanket, and he looked like he was ready to snooze. The patient pooch stared intently at his owner as she held him up in front of her and talked to him in a baby voice.

Before Dumpy went "night night," Kaley gave him some smooches on each cheek. She then asked him if he wanted some kisses on his "lipsies." Dumpy responded by licking her mouth.

"Oh! You give me kisses. Oh, I love you, Dumpy!" Kaley said as she continued being completely oblivious to her husband's presence. "Oh, Da-dump-dump, is it time for night-night?"

In a second video clip, Kaley's "little Dumpster" gave her a big yawn, seemingly indicating that he was ready to call it a night. 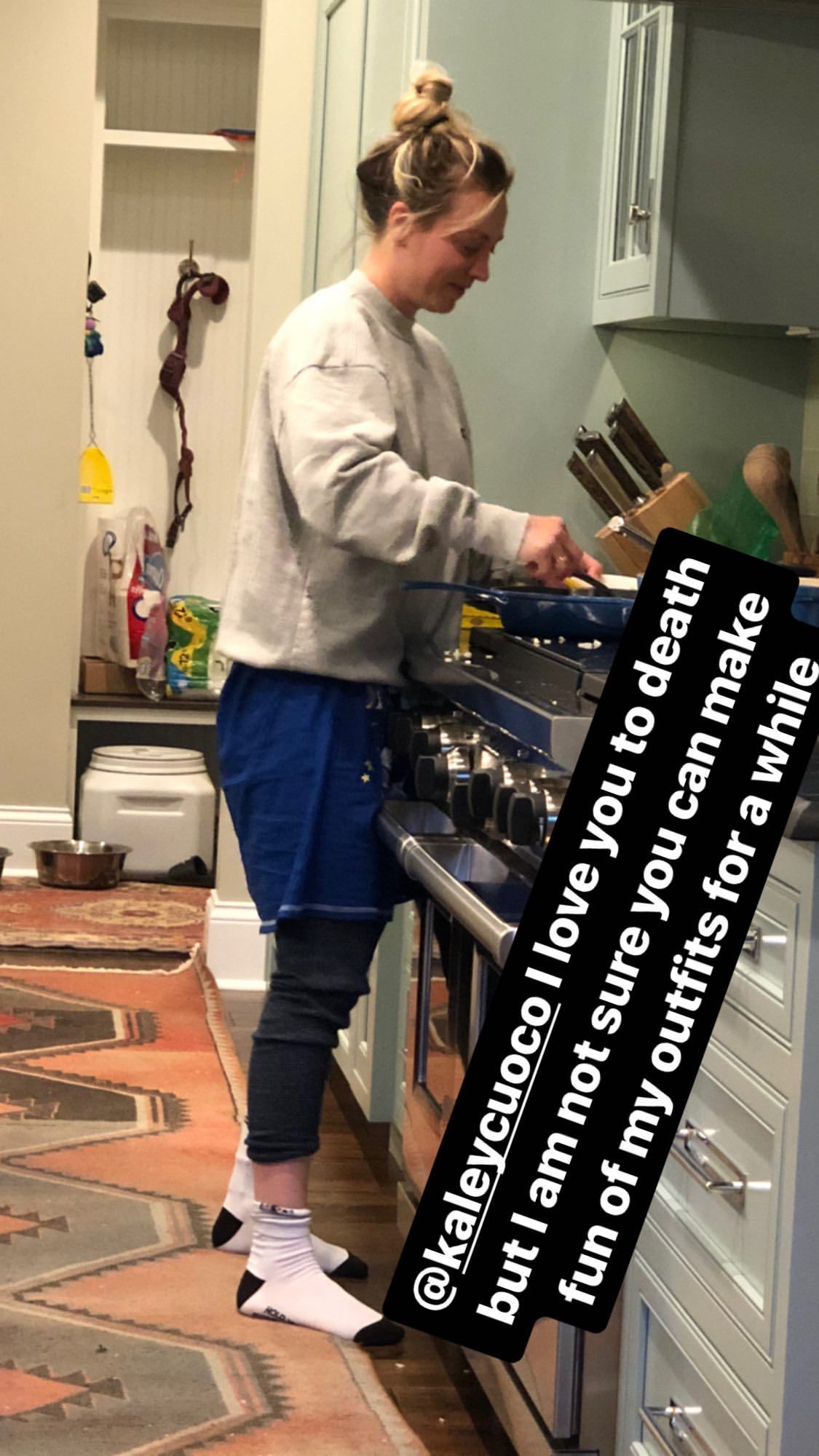 Karl also shared a pic proving that celebrities do cook for themselves, even ridiculously rich television icons like Kaley. However, he couldn't resist poking fun at the outfit that The Big Bang Theory star chose to wear while she stood over the stove. In addition to her aforementioned sweatshirt, she had on a pair of oversize blue athletic shorts over a pair of charcoal leggings, which were partially pulled up. One of her white-and-black crew socks was rolled down to her ankle, while the other was pulled up over her calf.

"I love you to death but I am not sure you can make fun of my outfits for a while," Karl wrote.

Kaley Is Ready For A "Big Bang" Reunion

Kaley has a lot on her plate these days. She has new seasons of her HBO Max series The Flight Attendant and her adult animated comedy Harley Quinn in the works, along with a project that will see her star as screen legend Doris Day. As reported by Deadline, her production company has also obtained the rights to author Katie Russell Newland’s tearjerker, A Season With Mom.

However, it seems as though Kaley will always have a soft spot for the series that catapulted her to superstardom, and she recently told E! News that she would like to film a Big Bang Theory reunion show.

"I think in a few years or whenever anyone's open to it, I definitely will be down for that," she said.

And for the record, Kaley also told E! that Karl does not ask her for permission to share funny pics and videos like those above.

"He does not ask for my approval," she said. "Very rude."