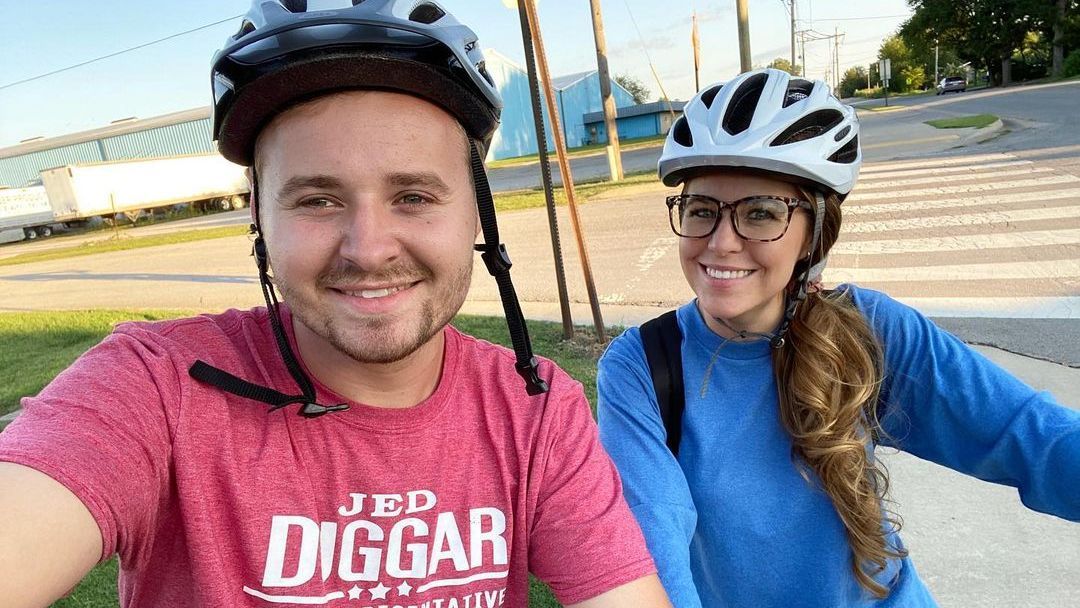 Jed Duggar is a married man! Before the 22-year-old Counting On star and Katey Nakatsu were pronounced husband and wife over the weekend, Jed's new father-in-law compared the newlyweds to two different types of containers during a bizarre speech that left some critics of the Duggar family feeling sorry for Katey.

According to Hello!, the couple got hitched in Arkansas on Saturday. Their wedding was livestreamed on YouTube, so fans and snarkers alike were able to witness the couple's vows. The ceremony was held outdoors near a pasture, where cows could be seen lazily grazing behind Jed and Katey.

How Long Did Jed & Katey Wait Before Tying The Knot?

The Duggars are known for their quickie courtships, engagements, and marriages, so it should come as no surprise that Jed and Katey rushed to the altar. In an Instagram post, Jed revealed that they spent a year "quietly developing" their relationship before they walked down the aisle. He reportedly popped the question last November.

Before news of their engagement broke, there were rumors that Jed was engaged to Lauren Caldwell, the younger sibling of his sister-in-law, Kendra Duggar.

Jed already has a career in real estate to support his wife and future family. He's also tried to follow in his father's footsteps by getting involved in politics, but he lost his bid to become the Arkansas State Representative for District 89. Even though he was defeated by a female incumbent, his father-in-law seems to believe that women belong at home.

During the wedding, Katey's father, Kory Nakatsu, spoke about how Jed will "go into the world and have tough days." He said that it would be Katey's job to be there for Jed and "respect him" when he walks in through the door. Kory also called his daughter the "heart of the home." His words strongly suggested that he doesn't expect Katey to work outside the home.

Katey Is Deemed The 'Weaker Vessel'

After reading a Bible verse that describes a wife as a "weaker vessel," Kory gave the verse his own modern spin by comparing Katey to a delicate vase and Jed to a tough piece of Tupperware.

"We talked about, uh, men are kind of like the old plastic Tupperware one gallon, and the ladies are like the vase, the one gallon: equal capacity vessels," he said. "We can treat one pretty rough. We can take you camping, we can change the oil in the car. It doesn't really matter. But with the vase, we give honor to the weaker vessel. We treat it differently."

While reciting his vows, Jed read a Bible verse stating that the husband is "the head of the wife," and he described himself as Katey's "spiritual leader." Katey accepted her submissive role by saying, "God has ordained that the wife be subject to her husband." She also told Jed that she would "submit to your authority" and "submit to your leadership."

The speech and vows were a hot topic on the Duggars Snark subreddit, where the wedding was deemed "The Jedding." Some snarkers blasted Kory for his comments about women, with more than a few pointing out just how strong a woman has to be to endure the pain of childbirth.

"I’m sure 'weaker vessel' is a term she’ll come to resent about 9 months from now," quipped one commenter.

Others suggested that Katey was being treated like a piece of property.

"This speech is so disgustingly possessive," read another comment.

"Oh god this poor girl, it's like watching cattle be sold off at an auction," a third netizen wrote.

"If my dad worked a metaphor into my wedding ceremony comparing my spouse to a Tupperware container full of used car oil I would cry," remarked a fourth Reddit user.