With NASA set to announce a "major science finding" about Mars on Monday, a top online UFO expert has claimed that he recently discovered an "alien figure" on the Red Planet's surface, standing and patiently watching as the NASA Mars Curiosity Rover rolls by. In fact, the alleged alien shows remarkable calm in the photo — actually two photos — because at least according to the UFO researcher, the creature is only "three to four inches" tall, meaning that this alien is lucky that the rover didn't crush him.

But the diminutive size of the alien observer is not unusual, according to Scott C. Waring, editor of the popular UFO Sightings Daily blog.

"We found quite a few alien figures that looked human-like on Mars, that are very, very small," the UFO researcher says in his video revealing the "find," viewable above. "Are they alive? Are the petrified? I don't know. One thing I do know is that it's not statues and it's not natural."

Here's one of the original NASA photos snapped by the Curiosity Rover, supposedly showing the "alien figure," according to Waring.

The alleged very small alien is visible to the right in the upper half of the photo, but Waring went ahead and highlighted the image of the humanoid figure in his own version of the photo posted in his blog. 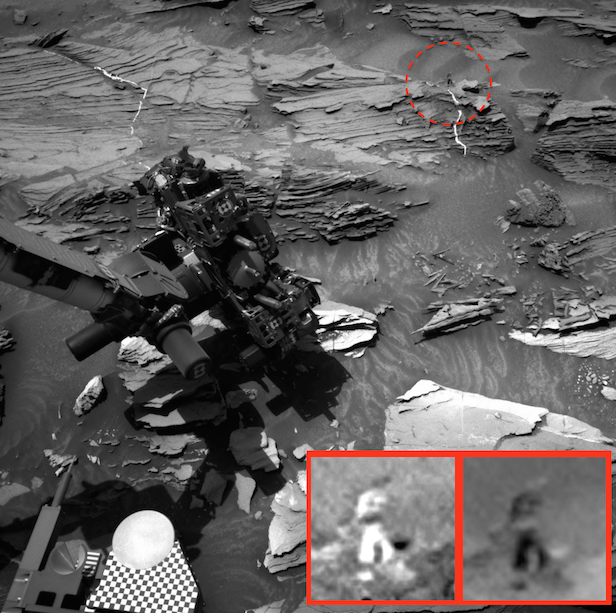 He explained his finding on the well-trafficked UFO Sighting Daily blog.

"I was at one of the two blogs that NASA has for the rover and caught sight of something standing upright on two legs. When I made the photo 5X bigger I found that the figure seemed human-like," Waring wrote.

"I have reported about 10 figures over the last 3 years... all of them small beings like this. Some of them looked alive, others looked petrified by some cruel weapon," the UFO hunter continued.

"Why does NASA ignore these alien figures? Because finding life is not part of their public mission, but is on the rovers covert missions it performs. Publicly, the rover is there to appease the curiosity of the public... thusly they named the rover... Curiosity."

Could this actually be a living — or perhaps "petrified" human-like alien standing on the surface of Mars, oblivious to the hostile environment, where average temperatures stand at a frigid 81 degrees below zero Fahrenheit, and the suffocating atmosphere is composed mainly of carbon dioxide?

In addition to the discovery of this and other earlier "alien figures" on Mars, Waring also this month posted his revelation of a "scorpion-like creature" in a NASA photo taken by the Curiosity Rover. The creature, according to Waring, appeared to be alive.

Inquisitr coverage of the "scorpion" discovery may be accessed at this link.

While NASA rarely, if ever, comments on such "discoveries" by UFO hunters in its photos from Mars, the International Space Station and other destinations in space, scientists generally explain such sightings as examples of pareidolia — the phenomenon which is defined as the tendency to see recognizable patterns or figures where they do not exist, due to the human mind's automatic attempt to find familiar patterns amidst otherwise random data.

Pareidola is responsible for the perception of a "man in the moon," as well as, for example, the supposed appearance of the face of Jesus on a piece of toast.

But if the huge NASA announcement scheduled for September 28 is not to reveal the discovery of tiny alien figures, what is it?

Mars mystery solved? Find out Monday at 11:30am ET at a live briefing on NASA TV: http://t.co/YYpCP6fv3Y Q? #askNASA pic.twitter.com/Bm35D6DZho