An alien creature that was recently discovered in Africa is not actually an alien.

I know, it’s disappointing. According to Dr. Magdalena Braum of the Crags Veterinary Clinic, the strange looking creature is actually just a baboon.

Braum said: “Anyone could see it was baby baboon.”

The animal was discovered by national park ranger Llewellyn Dixon and his 17-year-old son. The photos created a bit of a stir on the internet but the alien rumors were quickly dismissed when Bruam performed an autopsy on the creature.

Braum said that the baboon probably became misshapen after its death. The veterinarian said that its mother probably continued to carry it around after it died.

Braum said: “We have seen it quite often in baboon research troops, when females carry the deceased infants sometimes for as long as three to four weeks on their tail section before finally discarding them.”

Braum also said that the baby baboon was probably killed by one of the males in the pack.

Braum said: “It was most likely killed by a bite through the skull soon after birth – possibly infanticide which is very common in some primate species when a new male takes over the troop.” 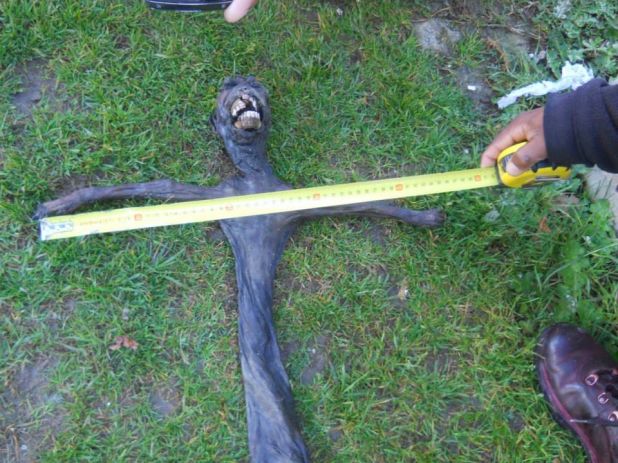 ‘Days Of Our Lives’ Spoilers: Ben Tries To Escape, Chloe Returns With Info On Eve August 4, 2020

Lori Harvey Soaks Up Some Sun In A Sexy Watercolor Bikini While At The Pool August 4, 2020