In the latest development, the Northampton Clown that “terrorizes” the tiny British town has spoken out, claiming it’s all in good fun.

For those unfamiliar with the story so far, the individual in question, very much the spitting image of Pennywise from the 1990 horror movie It (based on the Stephen King novel by the same name), first showed up on Friday the 13th. He has since been quite busy looking creepy all over the place, especially on social media.

The clown, who could be the web’s first ever viral clown, even set up his own Facebook page, Spot Northampton’s Clown in order to keep the world up to date on his… weirdness? The painted one has become so prominent that he’s got his very own nemesis: Boris the Clown Catcher (yes, you read that right). In order to assuage the fears some of the locals have about a horror movie clown randomly popping up to terrorize their town, the clown is now doing press.

“I just wanted to amuse people,” the man behind the makeup told the Northampton Chronicle & Echo.

The man, who wishes to maintain his anonymity, likened his exploits to a horror movie, noting that many folks “enjoy being a bit freaked out.” He also confirmed that his getup was indeed inspired by the terrifying Pennywise from It, making frequent reference to the film during the course of his interview with the Chronicle. The clown, who has appeared with balloons and a teddy bear, understands how some people may have been upset by his appearance but insists he was simply trying to provide a bit of levity.

“Naturally, some people would have been extremely frightened by what they saw, but I hope many are starting to see it as a bit of harmless fun,” the clown said. 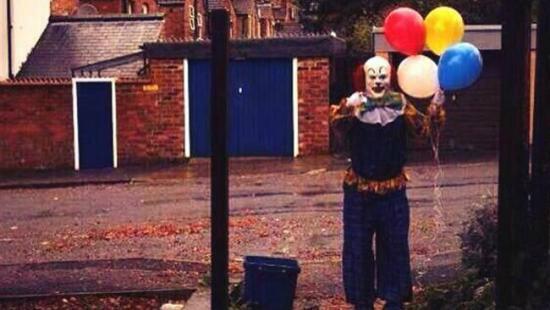 Jennifer Lopez Plays Volleyball In A String Bikini In Turks And Caicos September 22, 2020

Ashley Resch Sizzles In Off-White Minidress: ‘She Got That Drip’ September 22, 2020