The "Face on Mars," which appeared in a NASA photo taken by the Viking orbiter in 1976, was one of the first significant "anomalies" that turned up in images of the Red Planet snapped by various NASA cameras. But that infamous "face" has now given way to a new "face on Mars," according to a top online UFO researcher — and this face is apparently a profile with very distinct human features.

But even better for armchair alien hunters everywhere, this latest "face" is an anomaly that can be discovered by anyone with a computer and access to Google Earth software. The software also features a "Mars" view, allowing users to comb every inch of Earth's nearest neighbor in the Solar System

But before trying to find the new face on Mars in Google Earth, users may want to view the video below, in which prolific YouTube UFO archivist Sandra Elena Andrade demonstrates how she made the Face on Mars discovery.

The researcher posted the video on October 7, but only this week Andrade's work in locating the "face" was highlighted by Scott C. Waring, editor of the popular UFO Sightings Daily site, which has cataloged dozens of such Mars "anomalies."

"This extraordinary face was found by Sandra Elena Andrade of Youtube. The close up really shows the detail above of the eye, nose, nostril, mouth and chin with protruding cheeks," Waring wrote on his blog this week. "Only by finding these faces are we ever going to know about all the species that exist in our solar system. Hats off to Sandra for the great discovery."

Waring also offered his own enhancements to the images found by Andrade on Google Earth, outlining for readers exactly what they should be looking for in the "face."

In another enhancement, Waring colored in the area that he believes to be a deliberately carved outline of a human — or perhaps alien humanoid — profile.

Excitement over what many UFO researchers believed to be the relics of an ancient Martian civilization began in 1976 when the Viking camera sent back the following image, in which a pattern of light and shadow suggests a face is clearly visible.

Mystery over the so-called Face on Mars persisted for decades, until new NASA Mars missions sent back closer and better photographs of the Martian surface seen from space. What had appeared to be a human face in 1976 was revealed as just a photographic illusion in photos such as the following NASA photo of the original Face on Mars, taken in 2010. 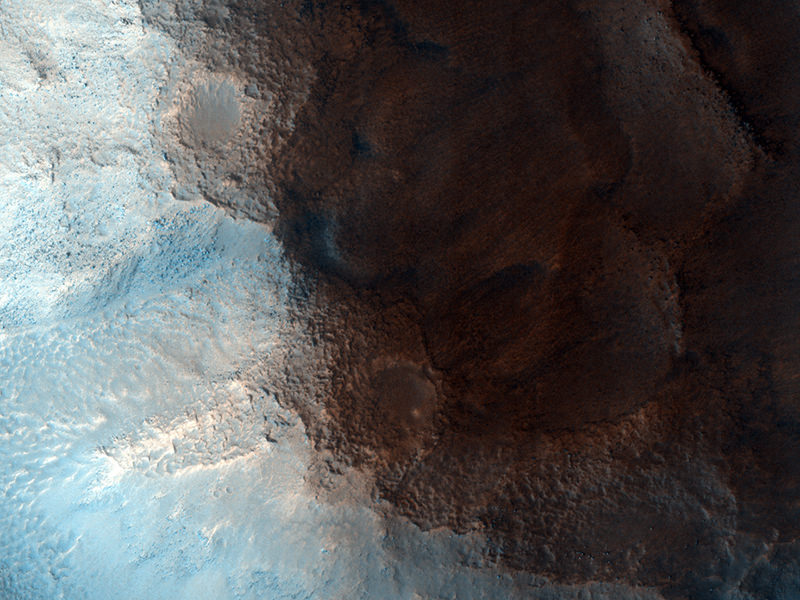 "This is the famous 'Face on Mars,' and is the closest image ever of this landform, taken by the best Mars camera ever, HiRISE on the Mars Reconnaissance Orbiter," explained Universe Today News, in publishing the above image. "And it certainly looks like …. the top of mesa, which is exactly what it is."

The Face on Mars turned out to be nothing more than mountain.

But nonetheless, UFO researchers have continued to discover new face after face and other formations on Mars that they claim must have been created by a long-extinct civilization that lived on Mars millions of years ago, and have now been captured in NASA photos.

[All Images By NASA]