A massive pyramid on the surface of Mars was spotted by an online researcher into alien anomalies using a tool available to anyone — Google Earth. That means curious readers do not need to take the researcher’s word for it.

This giant pyramid is clearly visible, and you can investigate it for yourself to decide if this is a significant discovery or just another optical illusion similar to the famous “Face on Mars.”

The apparent pyramid was located by Marcelo Irazusta, who also found several other odd anomalies using Google Mars, a feature of the Google Earth application. In the above video, compiled by Irazusta and posted by Sandra Elena Andrade on March 25, not only is the pyramid visible, but so is a “city” on Mars and the gigantic numerals “58” seemingly etched into the Martian surface.

The video came to the attention of the man who is more responsible than anyone else for spreading UFO and alien-hunting information on the internet — Scott Waring, editor of UFO Sightings Daily.

“This is an interesting find,” Waring wrote upon seeing the video. “A pyramid on Mars that is 2.75 km across each side. This pyramid also has a doorway entrance on one side that is 200×100 meters wide. An extraordinary monument for sure, discovered by Sandra Elena Andrade of Youtube. This person searches Google Mars map for ancient architecture. There is also an assortment of other discoveries that they made in the video below, which you may find fascinating.”

The base of the pyramid, according to the Google Earth ruler function, is more than a mile across.

To investigate the pyramid for yourself, download the Google Earth app. Once the application is installed and initialized, select “Mars” from the drop down menu under the “planet” icon in the toolbar.

By zooming in and out, you can decide for yourself whether the structure is really the marvel that it originally appears to be — or something more ordinary.

Locating the original Mars anomaly, the so-called “Face on Mars,” is easy. The coordinates are already built into the application. Just type “Face on Mars” into the search box, and the Google software finds the infamous “face” for you. 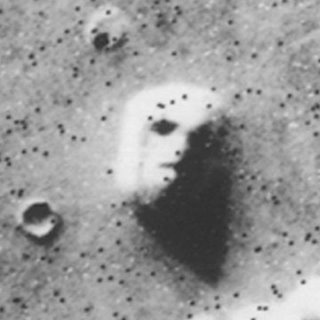 But prepare to be disappointed. The supposed “face” actually looks like this.

Whether the pyramid on Mars will also turn out to be a disappointment or an incredible discovery is up to individual Google users.

The Queen Reportedly Wants ‘Megxit’ ‘Over And Done With’ February 22, 2020

Melissa Riso Forgets Her Pants In Fishnets & White T-Shirt: ‘Stop Giving Your Love Away To Just Anyone’ February 22, 2020