Kendall Jenner posted a sizzling bikini shot exposing as much skin as the 19-year-old aspiring supermodel could bare without going totally nude while standing in full view of her hotel room window. She posted the racy pic to her Instagram account on New Years Eve.

Her only potential problem was that at the time she exposed her skimpily-clad bikini body, Jenner was visiting Dubai, the bustling city of 4.1 million on the shores of the Persian Gulf in the United Arab Emirates — a country where strict Islamic traditions regarding female dress codes apply.

While out in public on her tour of the UAE with several other young social media and Hollywood starlets, Jenner wore the required hijab, as seen in the Instagram photo above. But in her own hotel room, she stripped down to a barely-there bikini, stood in the window, and snapped the below selfie.

So is Jenner violating any local laws with her exhibitionist Instagram? Probably not. Despite the fact that the country is overwhelmingly Islamic and traditional, the emirate of Dubai has no laws dictating dress codes.

However, according to one Dubai police spokesperson, while “visitors dress decently out of respect, not because they are forced to do so by the law,” the police will nonetheless take action if they receive a complaint about a person, whether a Dubai resident of foreigner, who is said to be dressed “indecently.”

Police in Dubai tend not to show much sympathy for women perceived to have behaved in ways not consistent with Islamic customs. In 2013, in a well-publicized case, a 24-year-old Norwegian businesswoman reported that she had been raped, only to have police arrest her and jail her for 16 months on a charge of engaging in sexual relations outside of marriage, which is a crime there.

In 2008, the same thing happened to an Australian woman who reported that she was drugged and raped, only to be imprisoned for eight months on an adultery charge.

But Kendall Jenner and her friends have already pushed the boundaries of taste, at least according to Muslim customs, during their trip to Dubai. A group that included Cody Simpson, Selena Gomez, Jenner, and other adolescent celebs posted a shot taken inside the sacred Sheik Zayed Grand Mosque. 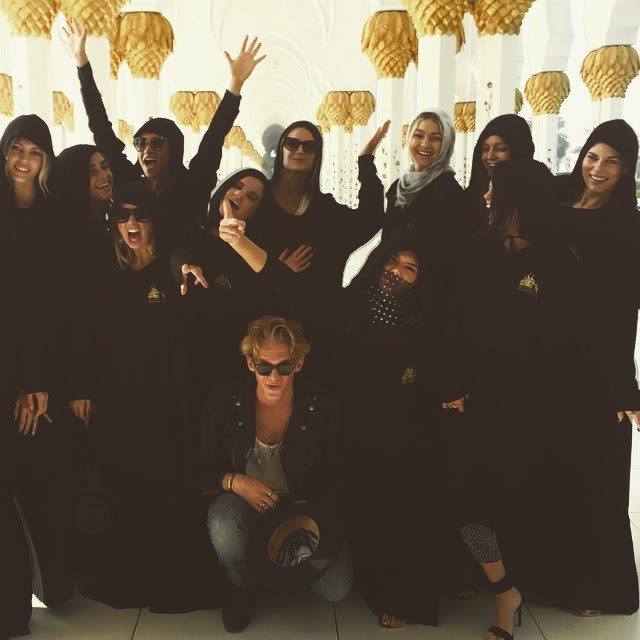 While all of them, including Kendal Jenner, were dressed more or less appropriately — no bikini apparent — some observers felt their over-the-top gestures in the photo showed disrespect.

Gianna Bryant: Who Is Kobe Bryant’s Daughter That Was Killed In A Helicopter Crash? January 26, 2020

NBA Stars And Celebrities React To The Tragic Death Of Kobe Bryant January 26, 2020