Syria President Bashar al-Assad and his regime tortures and kills opponents on an “industrial” scale, according a new report based on thousands of grisly photographs smuggled out of Syria by a defector, according to CNN.

The cable network and the British newspaper The Guardian were each given the report, which is based on tens of thousands of photos that the report’s team of authors — three former United Nations war crimes prosecutors — obtained from a defector who they says was employed as a photographer by the Syria military police.

Identified only as “Caesar” to protect his security, the defector was a double-agent for Syria’s opposition that has been leading an armed rebellion against the Assad regime for more than two years.

Caesar told the report’s authors that his job was “taking pictures of killed people.” He was not a witness to the actual acts of torture and murder, only to the bodies left behind afterward.

“The procedure was that when detainees were killed at their places of detention their bodies would be taken to a military hospital to which he would be sent with a doctor and a member of the judiciary, Caesar’s function being to photograph the corpses,” the Syria torture report said, quoted by The Guardian. “There could be as many as 50 bodies a day to photograph which require 15 to 30 minutes of work per corpse.”

The stomach-churning photographs mostly depict the bodies of men between 20 and 40 years of age. One examination of the photos showed that 62 percent of the victims showed evidence of emaciation, danegrously low body weight caused by starvation.

The photos also depict evidence of “brutal beatings, strangulation, and other forms of torture and killing,” CNN said. 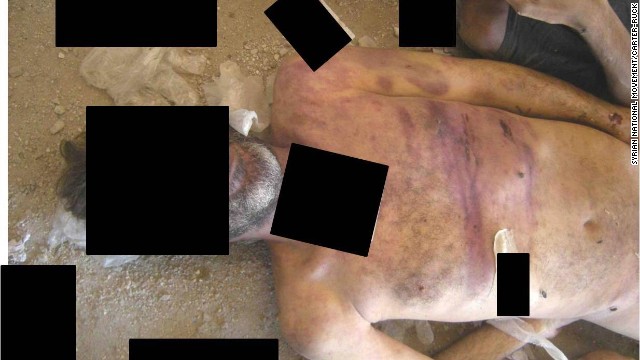 Former U.N. Prosecutor David Crane, an author of the report, told CNN that the photos represent, “a smoking gun… direct evidence of the regime’s killing machine.”

While CNN noted that it cannot independently confirm whether the images are real and unaltered, the photographs have been examined in detail by forensics experts, including an expert in how digital images can be manipulated.

The defector took the pictures between March of 2011 and August of 2013 when he defected, smuggling the pictures out of Syria with him on a flash drive. 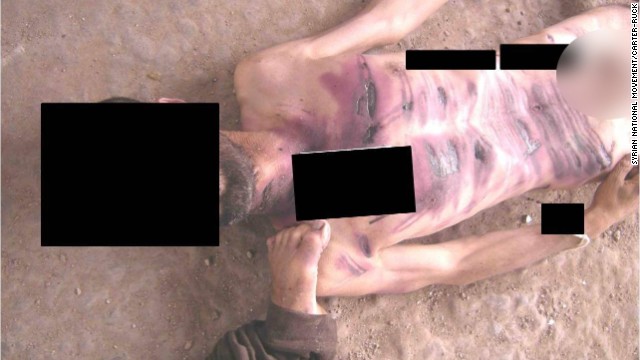 Another of the report’s authors, Sir Geoffrey Nice, cautioned that the photographs may still not be enough to convict the Syria strongman Assad of war crimes. However, the systematic nature of the killing operation would likely not be possible without top Syria government approval.

“It would not necessarily be possible to track back with any degree of certainty to the head of state,” Nice told The Guardian. “Ultimately, in any war crimes trial you can imagine a prosecutor arguing that the overall quantity of evidence meant that the pattern of behavior would have been approved at a high level.”

The release of the report, The Guardian noted, appears timed to come out at the same time as this week’s new round of Syria peace talks in Geneva.

‘Double Shot At Love’ Star Derynn Paige Is A Goddess In Navy Blue Lingerie With See Through Panels January 26, 2021