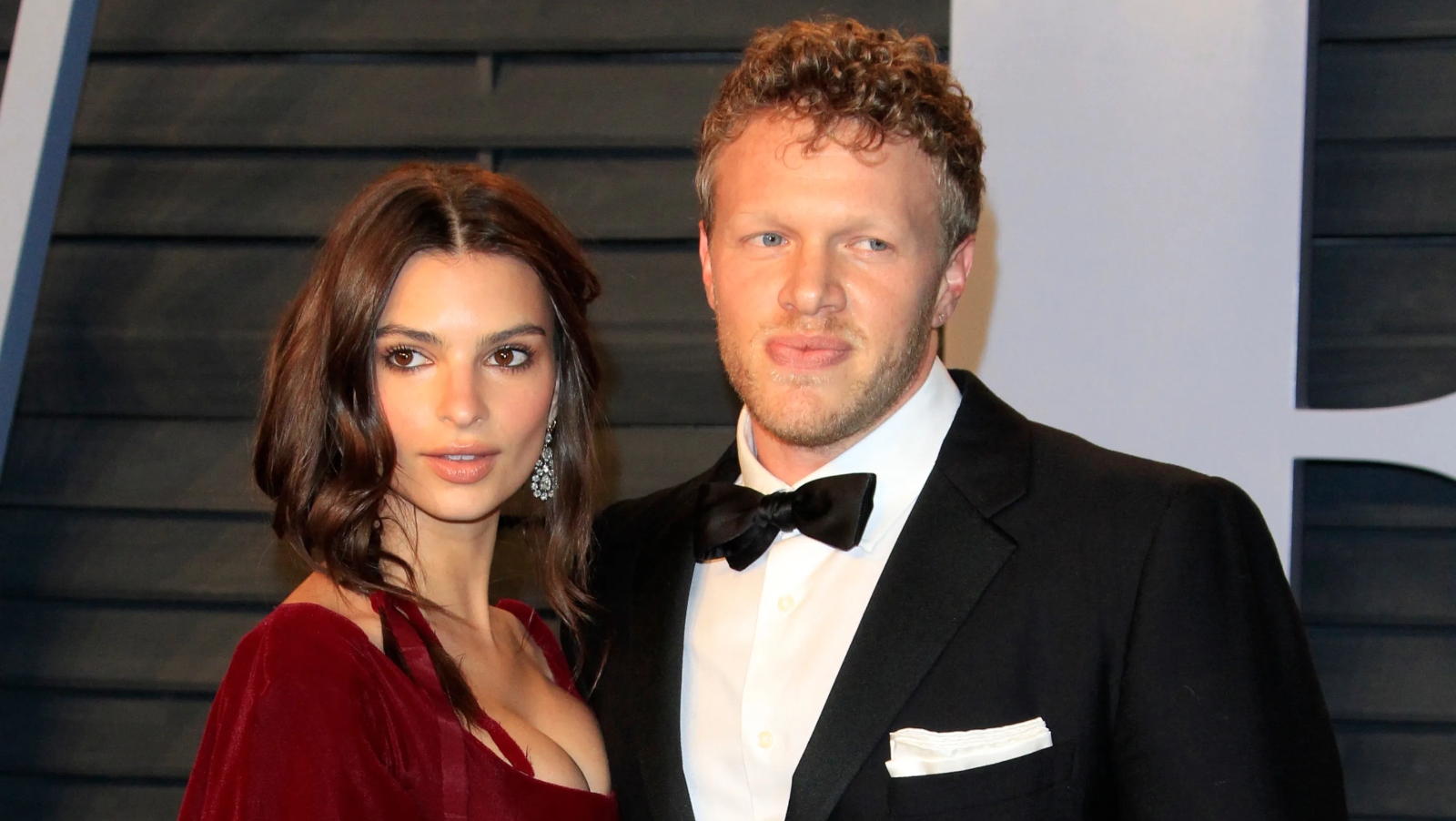 Supermodel, actress, and entrepreneur Emily Ratajkowski has been married to movie producer Sebastian Bear-McClard for nearly four years. Despite the couple's attempt to keep their love life private, their relationship became open to public scrutiny following their spur-of-the-moment wedding on February 23, 2018, which left everyone gasping in shock.

From accusations that she married him for his money to unpleasant remarks about his looks, Ratajkowski's fans have repeatedly attacked her husband on social media. Their 11-year age gap was also amply discussed -- she's 30 years old, while Bear-McClard is turning 41 in January.

However, the Vogue model doesn't seem to care what anyone thinks, proudly defending her hubby or simply ignoring the trolls. Photos of Bear-McClard abound on her Instagram feed, with the Inamorata swimsuit line owner often sharing old Polaroid snaps with her 28.5 million followers.

This is just as good, given that Bear-McClard has no social media presence of his own whatsoever. Although he used to post art imagery to the handle @sebobear a few years back, he has since vanished from Instagram altogether.

Get to know the model's film producer hubby. 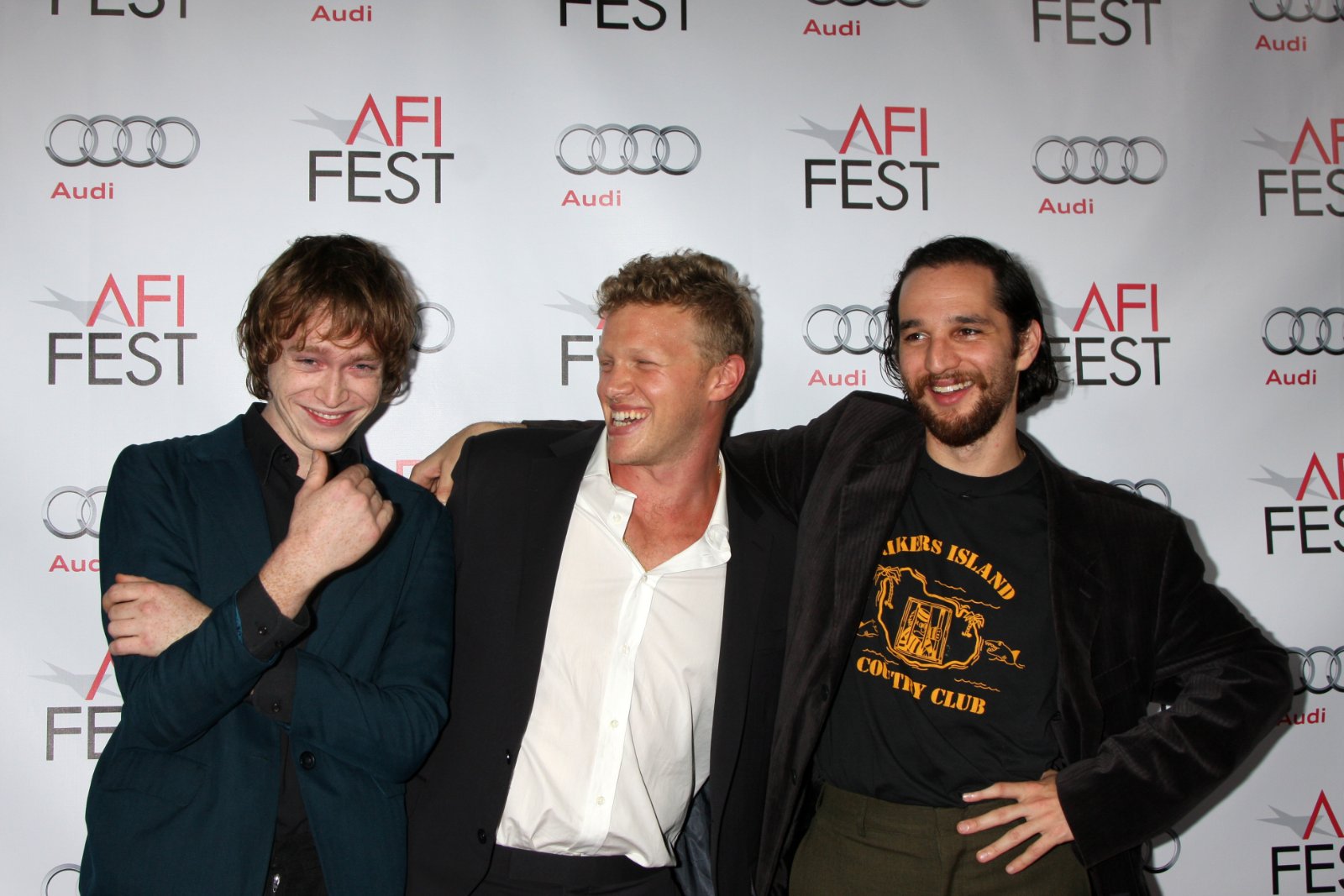 An independent movie producer, Bear-McClard's film credits include famous titles such as 2019's Uncut Gems, starring Adam Sandler and Jonah Hill, and 2017's Good Time, which starred Robert Pattinson. He's also produced Goldman v Silverman (2020) and Still Life (2006), according to his IMDb page. However, his most high-profile project so far remains Uncut Gems, for which he earned an Independent Spirit Award nomination for Best Feature in 2020.

His production company, Elara Pictures, was launched in 2014 by New York-based writer/producer/director brother duo Joshua and Ben Safdie, with Bear-McClard and Oscar Boyson as partners. Their first feature was the Heaven Knows What, in which Bear-McClard made a small onscreen appearance, the 2014 drama leading to another Independent Spirit Award nomination for the actor-producer.

Pictured above together with Caleb Landry Jones (L) and Joshua Safdie (R) at AFI FEST 2014, Bear-McClard has also been nominated for several Gotham Independent Film Awards, including Best Feature Film for Good Time.

In addition, he's directed two short films, Bottle Poppaz (2012) and Bolt from the Blue (2010), also writing the script for the latter. Before stepping behind the camera, Bear-McClard acted in a handful of movies between 2005 and 2008. 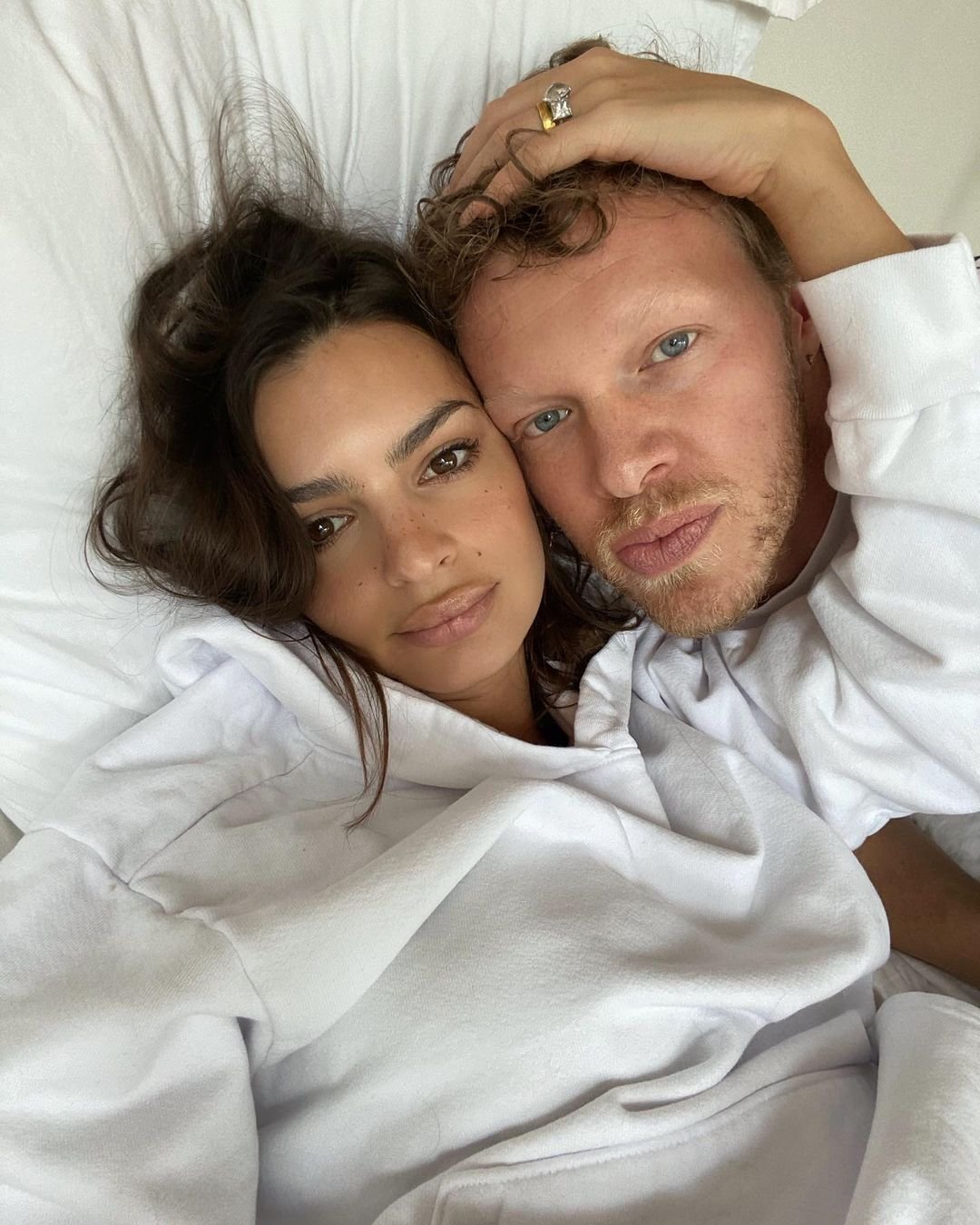 Bear-McClard comes from a family of artists and is the son of filmmaker, writer, and activist Liza Bear and Michael McClard. His mother famously co-founded the 70s' art magazines Avalance and Bomb. Meanwhile, his father's work has been exhibited at the New York City Museum of Modern art.

Ratajkowski touched on her husband's artistic background in 2019 when she lept to his defense in the New York rent scandal. At the time, Bear-McClard was accused of taking advantage of a rent loophole for struggling artists, making headlines for allegedly owing his landlord $120,000 after dodging pay for two years for their $4900-a-month NoHo, Manhattan apartment.

"He’s an independent movie producer so people thinking he’s rich is real nice but not based in fact. He was raised in the neighborhood he lives in now, both of his parents are artists who were priced out of their homes in downtown New York," Ratajkoski fired off on Twitter.

The supermodel continued: "I’m proud he’s fighting the good fight against a real estate conglomerate that bought the building he lives in for 40 million and has continued to spread misinformation on its tenants in order to profit. NYC has changed so much and it’s a shame that people who work in creative fields are being moved out of the city." As of 2021, Bear-McClard has an estimated net worth of $15 million, nearly double that of his supermodel-entrepreneur wife -- which is around $8 million.

Pictured above at the 2020 Independent Spirit Awards, the couple has faced criticism for their "rushed" marriage, with many claiming it was the money that attracted Ratajkowski to the movie producer. When news of their nuptials broke out just 10 days after their first public appearance, many questioned Ratajkowski's motives. Of course, her having recently ended a long-term relationship with music producer Jeff Magid only served to fuel the rumors at the time.

Ratajkowski set the record straight later that year on Busy Tonight: "We knew each other for a long time before and he likes to joke like, 'Yeah, everyone thinks we got married quickly but you vetted me for two years.'"

She added: "Women always know... I was always like 'Okay, I probably shouldn't hang out with that guy alone'... and then next thing you know I'm at the courthouse getting married." 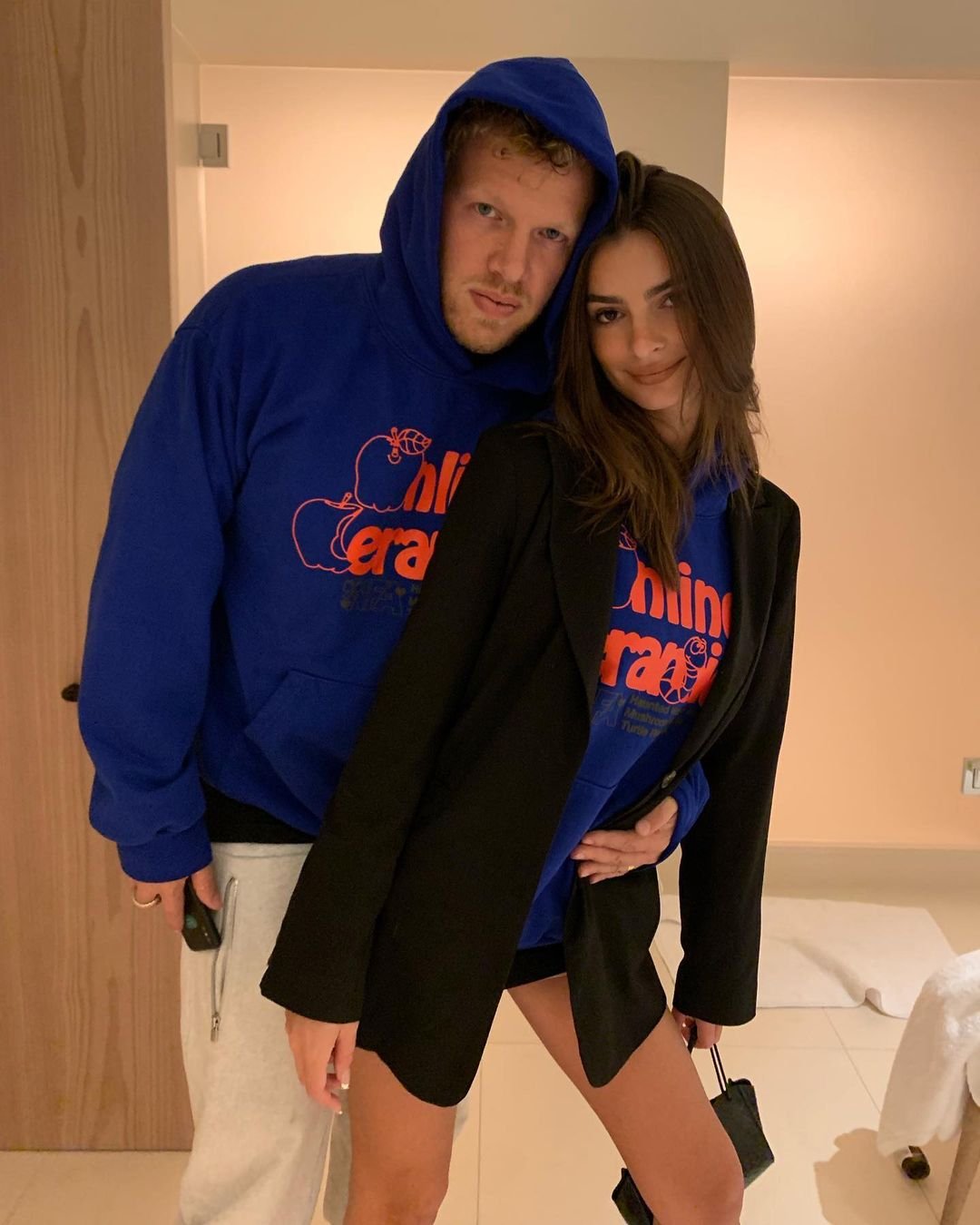 Bear-McClard and Ratajkowski tied the knot in a civil ceremony in New York City, with only a couple of friends in attendance. While the model now sports an eye-popping engagement ring, she later revealed her hubby came empty-handed when he popped the question.

“He proposed to me at Minetta Tavern [in New York City], and he didn’t have a ring so I was like, 'Mmm, nah,'" she dished on the proposal to Jimmy Fallon. "And then he took the paper clip that the bill was paid with and made me a ring, which I actually thought was really romantic."

The couple, who honeymooned in Utah at Canyon Point's luxurious Amangiri Resort, welcomed their first child together this year. Their son, Sylvester Apollo Bear, was born in early spring, with the new mom marking the moment on social media.

"Sylvester Apollo Bear has joined us earth side [sic]. Sly arrived 3/8/21 on the most surreal, beautiful, and love-filled morning of my life," she wrote on Instagram.

The family also has a Husky-German Shepherd mix named Colombo, which they adopted in May 2019.