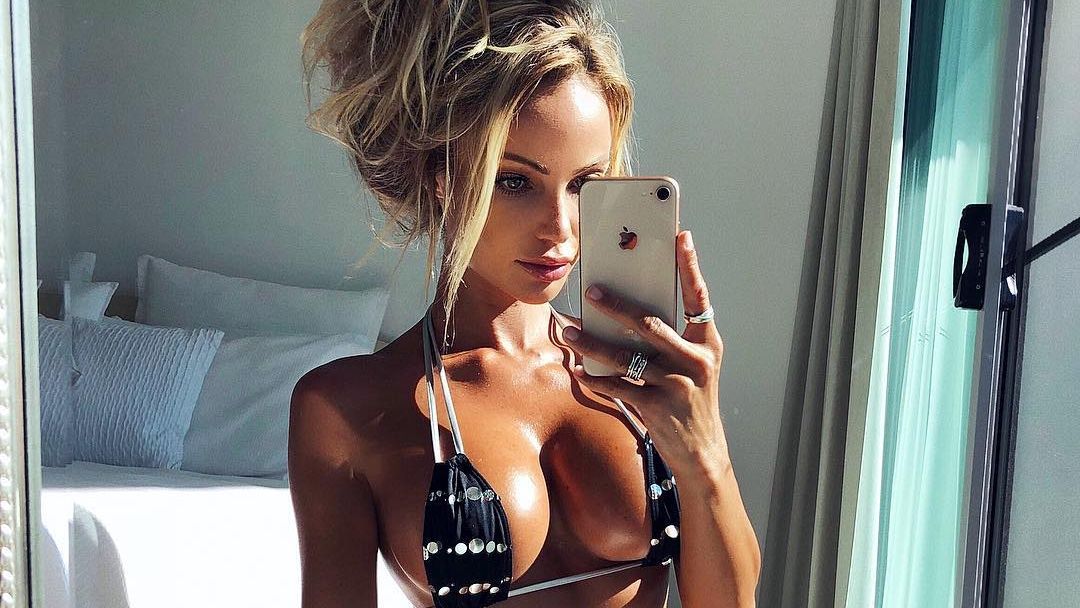 Abby Dowse enjoyed some time in the sun in her most recent Instagram share, and fans were there to pile on the praise. A photo added to her account on Thursday morning showed the Australian beauty working on her tan poolside.

The gorgeous blonde wore the tiniest string bikini and brandished her pert posterior in a tummy-down pose that allowed her audience to admire her toned booty. Followers seemed to be enjoying the view, as the post soon racked up more than 20,890 likes.

Abby captivated attention in an impossibly tiny red thong that left her sculpted derrière in full view of the camera. The model posed sideways, flaunting her heart-shaped backside and curvy thigh that was exposed by a thin spaghetti strap stretching above her hip.

The scanty bikini bottom tied on the side with an ample bow that balanced out its scarcity of fabric. The bold color made her chocolate-hued tan pop, making for a memorable addition to her eye-popping swimsuit collection.

"Suns out, Buns out," Abby cheekily but aptly captioned the shot, adding a sunshine emoji followed by a hamburger and a red heart.

The 31-year-old spotlighted more than her chiseled rear end. She rocked a minuscule blue top that struggled to contain her chest, serving up an eyeful of cleavage and sideboob.

The busty blonde was sprawled on a lilac beach towel and appeared to be lounging on one shoulder, raising the other one in the air to show off her perky assets.

Fans could notice the ruched design of the meager cups, which were shaped like narrow triangles and spaced widely apart. The angle also teased a glimpse of her trim midsection, although her bent elbow obstructed much of the view.

Abby coupled the mismatched bikini with a red baseball cap. She added plenty of bling with a layered necklace that sparkled on her décolletage and appeared to be wearing a bit of makeup.  While the visor hid her face nearly entirely, her voluptuous lips could be seen glimmering pink in the glaring sun.

The Aussie hottie laid her head on her upper arm and raised her bare feet, crisscrossing them in the air and suspending them above her firm bottom. Her golden locks emerged from under the hat and appeared swept to the side, allowing the back bow of her halterneck top to be seen.

The upload was a big hit with Abby's 3 million followers, who flocked to the comments section to express their appreciation of the hot look.

"You’re just flawless," said one smitten fan, followed by a heart-eyes emoji. "Always got that shine that nobody can take away," they added.

"Unreal such a goddess," gushed a second admirer.

"Love your caption and everything else," said a fourth devotee.

Abby has been delivering sexy bikini looks all week long. In her previous update on Wednesday, the stunner teased fans with cleavage as she modeled a neon-green two-piece that accentuated all of her incredible curves.

That look warranted several posts, including a steamy photo in which Abby exposed her abundant cleavage by unbuttoning her top.