Alec Baldwin returned to Saturday Night Live to reassume his recurring role as President Trump on Saturday, October 13, and he did so at the most opportune time to build off of the running joke on Kanye West that has strung the first three episodes of the show’s 44th season together.

Producers wasted no time in getting right to the week’s most sensational bit of entertainment news, with the episode’s cold open delivering the setting of Trump’s bizarre meeting with West and football legend Jim Brown in the foreground of a crowd of reporters and flicking cameras. As ABC News recounts, it wasn’t long before cast members Chris Redd, Kenan Thompson, and Baldwin were parodying some of the more memorable remarks from West’s diatribe and the President’s reaction to them via voiceover of his inner thoughts.

“Oh, this guy might be cuckoo,” Baldwin’s Trump at one point thinks to himself as his counterpart rambles on donning a “Make America Great Again” hat that he says flew him over to the White House. “I was in a room with Dennis Rodman and Kim Jong-un and they made a lot more sense than him… This guy makes Brett Kavanaugh seem cool and collected,” Trump then thought. 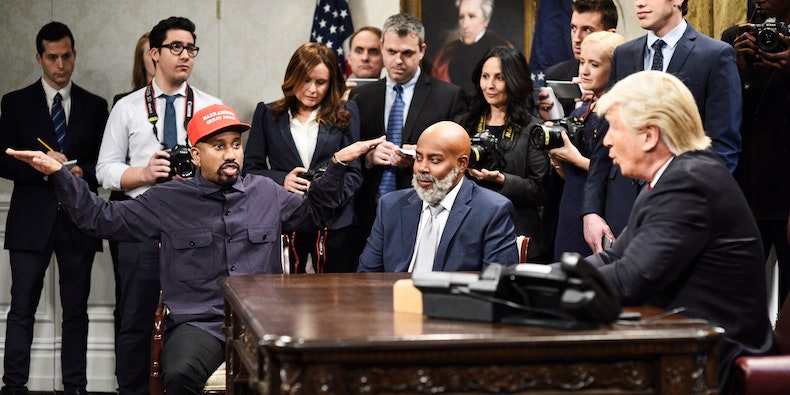 As Redd continues on with his impersonation of West, it begins to strike the Trump character that he sounds eerily familiar to someone he knows. “He doesn’t stop. He doesn’t listen to anyone but himself. Who does he remind me of?” he asks himself, before it dawns on him through West’s usage of phrases that Fox News cites as quotable from right out of the Commander-In-Chief’s book.

“Oh my god, he’s black me,” it suddenly dawns on him as Redd’s West tells Baldwin’s Trump that he considers himself a “stable genius” who has the “best words.” 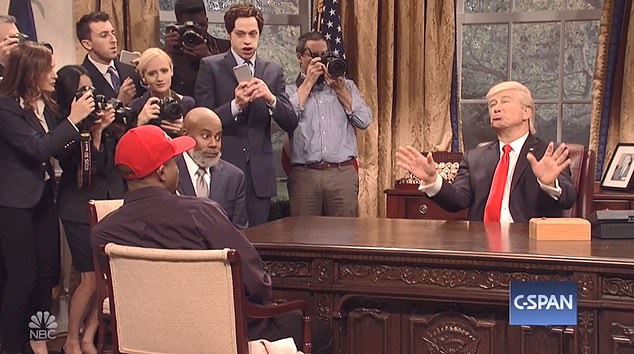 Since setting off a firestorm of controversy by stopping his performance on show’s season premiere to rant about a so-called Democratic agenda, media bias, and how he is supposedly bullied, SNL has remained on the subject of Kanye West through its famous use of sketch comedy. The Inquisitr previously reported on how the episode between the first and the most current consisted of cast member Pete Davidson pitching a “Weekend Update Segment” plea for the rap producer to get back on his meds, from one mentally ill entertainer to another.

Over the past few years, President Trump has bashed Saturday Night Live for what he says has been a drop off in the quality of its humor. He most recently labeled the Lorne Michaels production “a political ad for the Dems,” while applauding West for blowing up the concluding moments of his appearance to push his newfound MAGA-loving antics.