Spice Girl Mel B has been quite busy these days. However, it reportedly has nothing to do with work. This time around its all pleasure. The “Spice Up Your Life” singer reportedly had a steamy lesbian encounter with former Playboy model, Luann Lee.

According to New York Daily News, the 39-year-old singer met Lee at a bar inside when she starred in The Peep Show at the Planet Hollywood Hotel in Las Vegas, NV. During a recent interview with The Sun, Lee recounted the jaw-dropping experience in graphic detail.

The 53-year-old centerfold revealed that Mel B followed her into the disabled bathroom stall and that’s where things took a heated turn. Lee said that Mel began removing her cloths. She went on to state that she now understands why Mel B is famously referred to as “Scary Spice.” 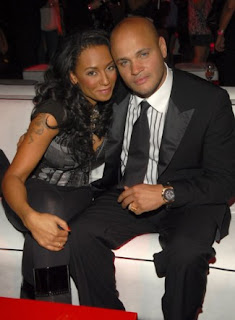 “It was very passionate and sensual. She’s like a man in that way – very assertive, very determined and very wanting. I can see why they call her Scary Spice,” Lee gushed. “I went into the handicapped stall because it’s bigger and I wanted to put my purse down – and she just popped in with me. She said, ‘Do you mind?’ and came right in. Then she just threw me up against the wall and started kissing me,” she added.

The two reportedly spent over an hour inside the bathroom. Mel’s husband, Stephan Belafonte, was said to have been outside waiting the entire time. However, their steamy encounter came to an end when a security guard came in to make sure everything was okay.

Lee went on to share details about Mel B’s sensual side. “She was a good kisser. Her lips are very soft and full and she has a tender touch. It was maybe a five-minute kiss and after that she started going for other areas.”

The two both allegedly agreed that they’d like to continue seeing each other. However, Lee felt they shouldn’t because Mel is married.

Jade Grobler Snaps A Selfie In A Black Bikini On Instagram September 23, 2020