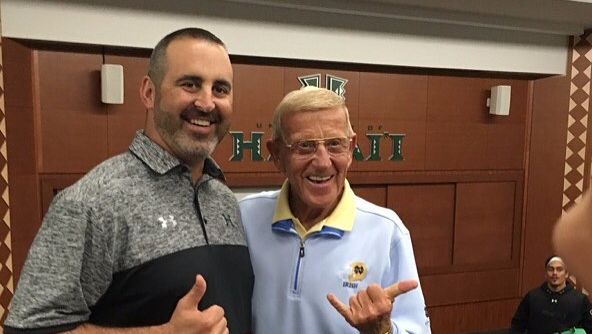 Many people were surprised by the decision of Washington State Cougars football coach Nick Rolovich to make Jarrett Guarantano their starting quarterback in their game against the Utah State Aggies football. Rolovich's action proved to be costly for the Cougars after they suffered a 23-26 defeat at the hands of the Aggies.

Guarantano may have more experience, but he isn't in any way better than the Cougars sophomore quarterback Jayden de Laura. Luckily for WSU fans, it didn't take long for Rolovich to realize his mistake.

In a recent interview with reporters, Rolovich revealed that he's planning to start de Laura in their upcoming game against the Portland State Vikings football regardless of Guarantano's health status.

“I think I would lean towards Jayden right now with all things considered,” Rolovich said, as quoted by 247 Sports. “I thought Jayden came in with a more mature mindset, I think he handled the original decision when we told him very well. I gotta give the kid credit for how he’s handled it … Without knowing exactly what’s going on with Jarrett, I would anticipate going with Jayden.”

Their game against the Aggies may have started with Guarantano as their QB1 but after his fourth drive, he was out of the game with an injury. After Guarantano was unable to continue the game, Rolivich immediately called de Laura to step up and fill the spot at the quarterback position. The sophomore quarterback didn't have a perfect game, but most people would agree that he performed better than Guarantano.

With de Laura as their signal-caller, the Cougars moved better on the offensive end and exposed the Aggies' weakness on the opposite end.

During his interview with reporters, Rolovich was asked about Guarantano's performance against the Aggies. Rolovich believes that the "things going with his legs" played a major role in Guarantano's struggle in their previous game. Though he admitted that they didn't move the ball well with Guarantano as their signal-caller, Rolovich said that he wasn't "awful."

Meanwhile, Rolovich said that there were a couple of decisions that he wished de Laura would have done differently in their recent game. However, he has seen major improvements in de Laura's maturity, believing that he has more to offer inside the field.

Starting Guarantano over de Laura wasn't the only controversial decision that Rolovich made in their previous game against the Aggies. When the offense in the fourth quarter drove inside the five-yard-line, the 42-year-old coach decided to give two snaps to fourth-year quarterback Cammon Cooper. The move turned out to be another big mistake for Rolovich as it resulted in negative run plays.

Though he acknowledged his mistake, Rolovich explained that he decided to use Cooper to preserve de Laura's body from taking more hits that could have put him in the same situation as Guarantano.