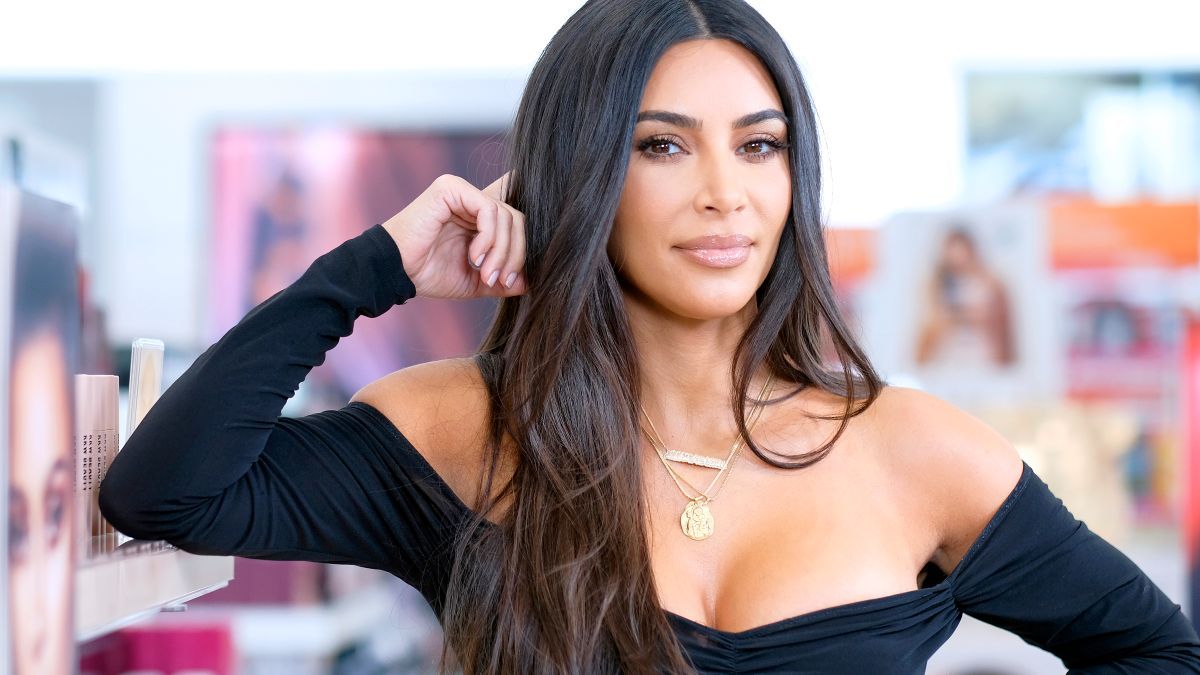 Kim Kardashian is making headlines after Shanna Moakler accused the E! star of having an affair with her ex husband and sister Kourtney Kardashian's new beau Travis Barker while they were still married, but it looks like she has fashion rather than gossip on her mind.

The business woman and socialite, who has recently had her fair share of drama, seemed unbothered by this latest scandal as she took to Instagram on Tuesday, May 18, to showcase a seductive look.

The SKIMS founder flaunted her internet-famous curves in a tight leather dress just as she's about to drop a new swimsuit collection, and fans were there for it. Check out the hot pic below! 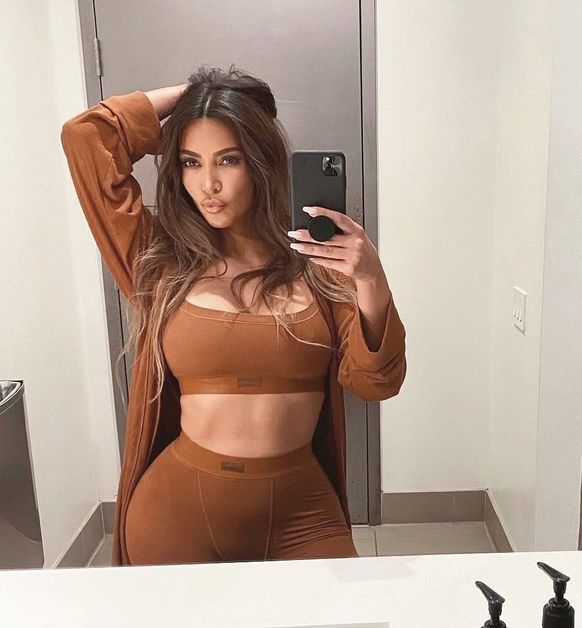 Kim looked sensational in a skimpy brown number by Miu Miu that beautifully highlighted her perfect hourglass shape. The strappy dress had a cut-out top that exposed her sides all the way to the waist. A pair of straps further accentuated her flanks, leaving a serious amount of skin on show,

Meanwhile, the daringly short skirt hugged her hips, skimming just to the middle of her thighs and showing off her lean legs.

Kim showcased her flawless figure as she stood in front of a massive mirror. She faced the camera but was looking over her shoulder at her reflection, checking out her profile in the mirror. 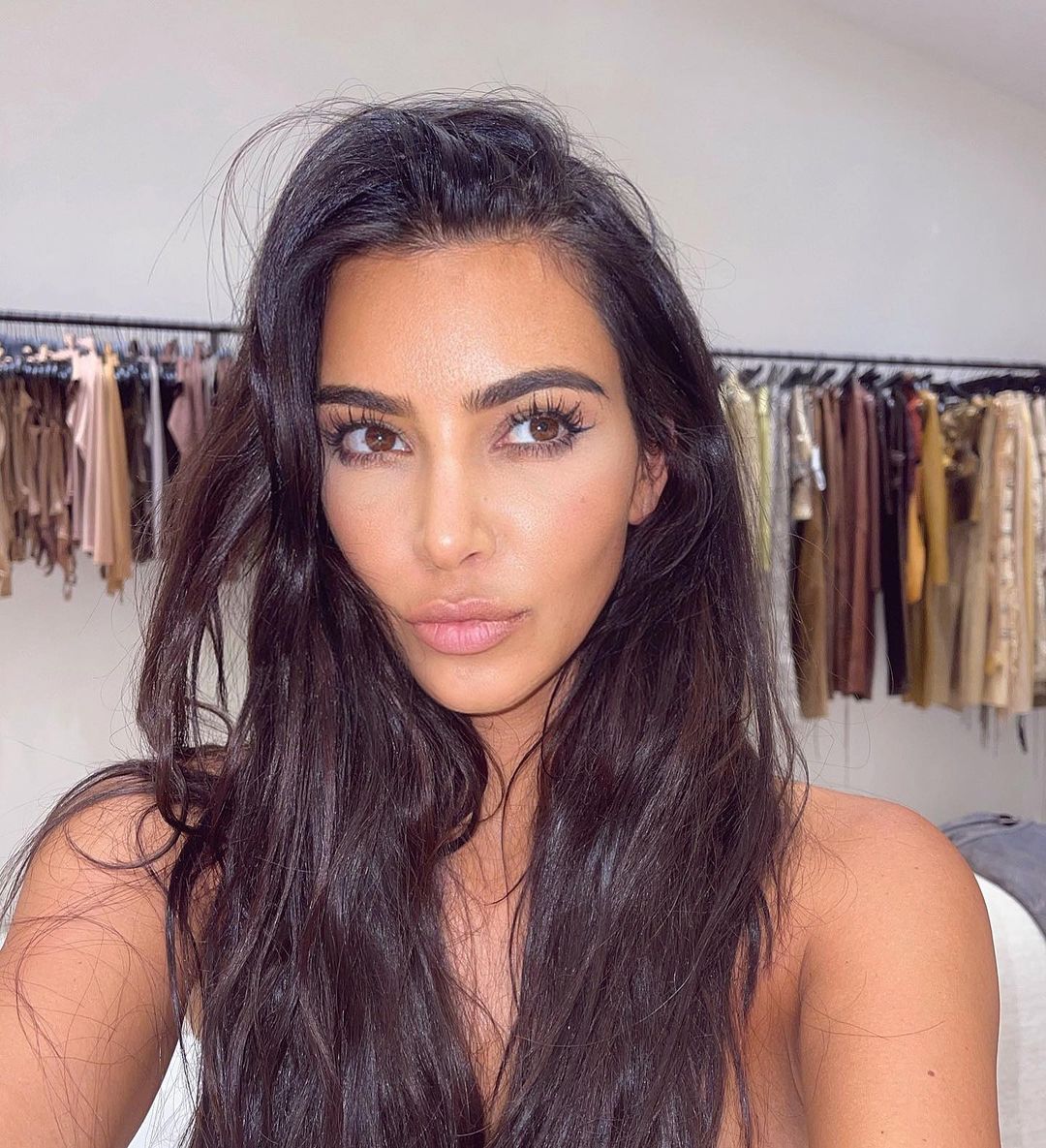 The Keeping Up With The Kardashians star held one hand behind her back, seemingly adjusting the outfit. Her messy hair, which was braided into a ponytail, suggested that she was still working on the look.

The 40-year-old seemed to be having trouble picking out what heels to wear, sporting mismatched sandals that both complemented the dress. One was a Gladiator-style, open-toe Manolo Blahnik in caramel, while the other one was a dark-brown Bottega Veneta that wrapped around her shin a number of times.

She also sported a brown Fendi bag with a bright-yellow side that added a splash of color.

The fashion icon, who has recently taken up golfing, enlisted fans' help in the caption, asking which shoe to go with.

Surely enough, many of her followers came through, flooding the comments section with helpful suggestions.

"Right for me," said Nicole Williams English, with 4,585 people agreeing with her choice.

"The right goes with the outfit better," chimed in another Instagram user.

"The brown. My right, your left lol," read a fourth message, which was rewarded with 1,339 likes.

What's Going On With The Latest Drama?

While Kim doesn't seem preoccupied with the latest headlines, the Blink-182 drummer's ex Shanna opened up about the alleged affair, which she said transpired in the early 2000s, back when Kim was Paris Hilton's assistant.

Talking with Us Weekly, the former Miss USA said, “I divorced my ex because, I saw them — I caught them having an affair.”

“He had already had an affair with Paris Hilton. And … at the time Kim was Paris’ closet organizer, they were best friends. And he started using [Kim] as a model for [his clothing company], Famous Stars and Straps.”

The former pageant queen said she and Travis were trying to fix their marriage at the time, when she was given a head's up by third parties that her then-husband had become involved with Kim.

“Someone sent me all their [text] conversations and I’m also close friends with people who were there, while things were happening.”

Meanwhile, Travis has publicly talked about his relationship with Kim well before he started dating her older sister, Kourtney.

In his 2015 memoir, Can I Say: Living Large, Cheating Death, and Drums, Drums, Drums, the rock star recounted an episode regarding a trip to Amsterdam with Paris and Kim.

“I kept on secretly checking out Kim, telling Lil Chris, ‘I don’t care if she’s the closet girl, she’s f–king hot,’” Travis, who said he never touched Kim, wrote in his book.

“We went to dinner, we went to lunch. You might think I would be doing the worst things with this girl because of her tapes, but it was the exact opposite of any other encounter I’ve had with a woman: with Kim, I wanted to be nothing but a gentleman to her. It was so weird.”