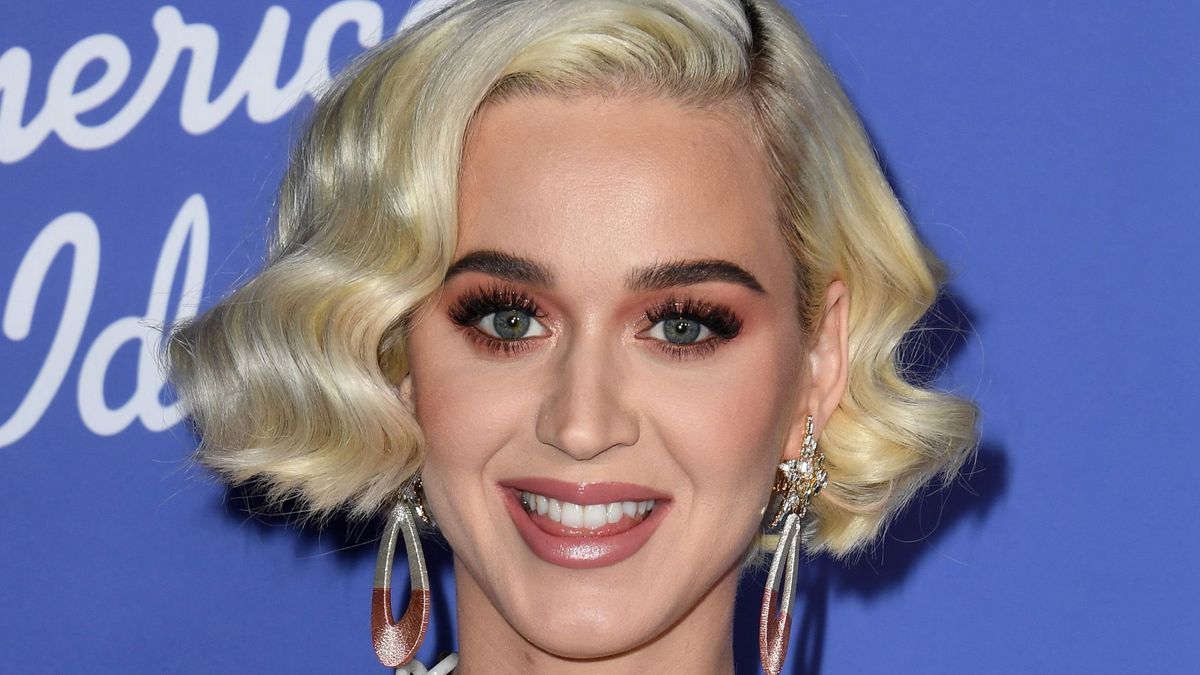 Katy Perry brought a little magic to American Idol this week when she dressed up like Peter Pan's pixie pal Tinkerbell for Disney night. Tink didn't have a love interest in Disney's animated 1963 film, but Katy gave her one. She described her as the girlfriend of Legolas, the elf portrayed by Katy's real-life Prince Charming, Orlando Bloom, in the Lord of the Rings movies.

Katy's Tinkerbell had pointy ears just like her elfin boyfriend. For some reason, she lacked the Disney's mascot's pencil-thin eyebrows (she didn't have any at all).

Katy has channeled numerous other characters from the Magic Kingdom over the years, whether intentionally or not. Check out a few of her stylish House of Mouse looks below. 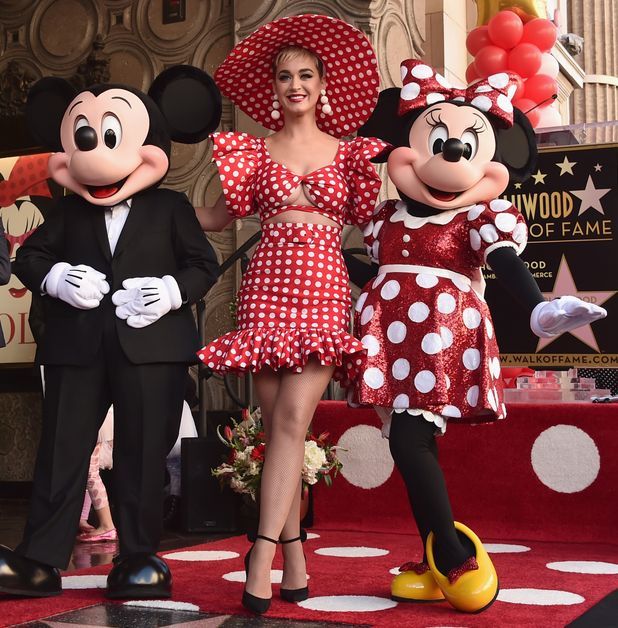 Katy Perry gave Minnie Mouse's classic red-and-white polka dot dress a fun update in 2018. Her take on the look consisted of ruffled separates that were still retro, but her top featured a modern cut-out on the bust. Instead of rocking a pair of mouse ears, she wore a floppy coordinating hat.

Katy was dressed like Minnie to present the character with her very own star on the Hollywood Walk of Fame. While Katy often dresses up like a feisty feline, her mouse pal's perpetual smile proved that she wasn't uneasy around the pop star with a legion of KatyCats.

For American Idol's 2019 Disney night, Katy decided to channel one of Disney's most iconic villains. The singer fittingly chose to dress like The Little Mermaid baddie Ursula, a character known for her incredible pipes.

Katy's costume included glittering tentacles covered with purple suckers, and she also rocked purple makeup. Her white hair had a punk rock vibe, as did her vivid blue eyeshadow and red lipstick.

While posing with her co-judges, Katy hilariously wrapped a tentacle around Luke Bryan's neck. She also shared a pic of herself enjoying a delicacy worthy of a sea witch: a shrimp cocktail. 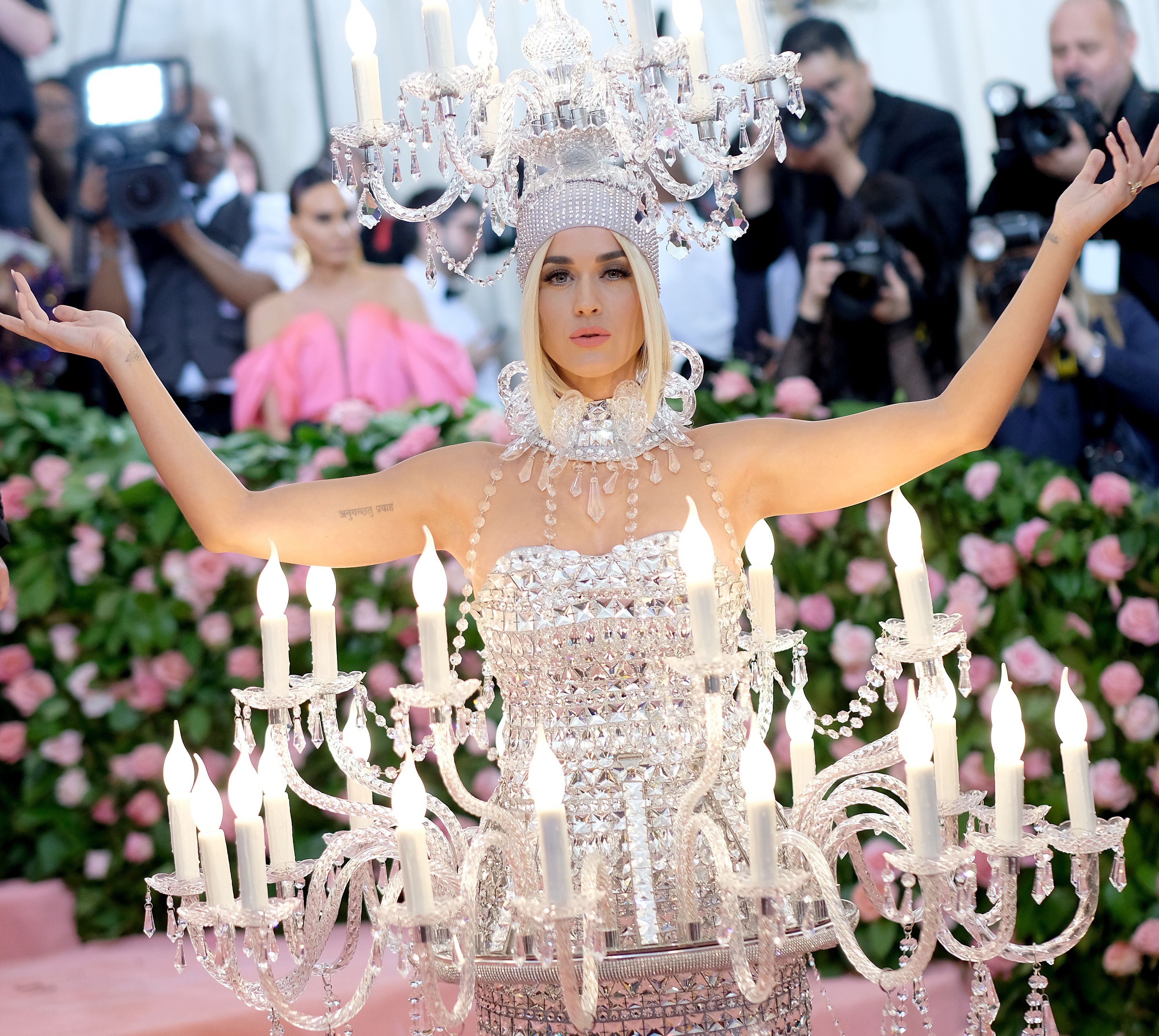 If anyone could get Beauty and the Beast lothario Lumiere to stop chasing those feather dusters around, it just might be Katy dressed like a dazzling chandelier.

For the 2019 Met Gala, Katy rocked a costume that would surely make the candelabra's wax draw drop. According to Elle, her glittering ensemble was a Moschino design. Her skirt was formed from fake candles that actually lit up, and she wore a matching headpiece that also glowed. Her dress was covered with reflective crystals, which made the "Firework" songstress shine even more.

Katy wasn't actually dressed up like the finned redhead who coveted legs when she appeared in an ad for Resorts World Las Vegas, but the "Waking Up in Vegas" hitmaker was rocking a shimmery tail that would surely catch Prince Eric's eye.

Her version of The Little Mermaid was a little more covered up. Instead of a shell bra, she wore a strapless blue-and-gold top that was textured to resemble scales. It matched her long tail. She also made a splash with her hairstyle, which was long, blond, and wavy like the sea. For a 2019 episode of American Idol, Katy gave viewers a look at what 101 Dalmatians villain Cruella de Vil might dress like if she weren't so obsessed with procuring and wearing the fur of spotted puppies.

Her black gown featured large white polka dots that made it look a reverse nod to the canines whose hides Cruella covets. Instead of sporting the character's two-tone hair style, Katy covered one side of her platinum blond locks with a flat black-and-white hat. Her choice of blood red lipstick was also very Cruella.

The Queen Of Hearts

Katy has dressed like some version of the Queen of Hearts on more than one occasion, thanks in part to her decision to call her perfume Killer Queen. In an ad for the fragrance, she wore a short red dress and a large crown, and she held a scepter topped with a jewel that resembled her perfume bottle. Her throne was on its side, suggesting that she was not a happy royal.

Katy looked like a nicer version of the Queen of Hearts when she got dressed up for American Idol on Valentine's Day. Her voluminous dress was pale blue, and its sides were decorated with rows of cartoon hearts. 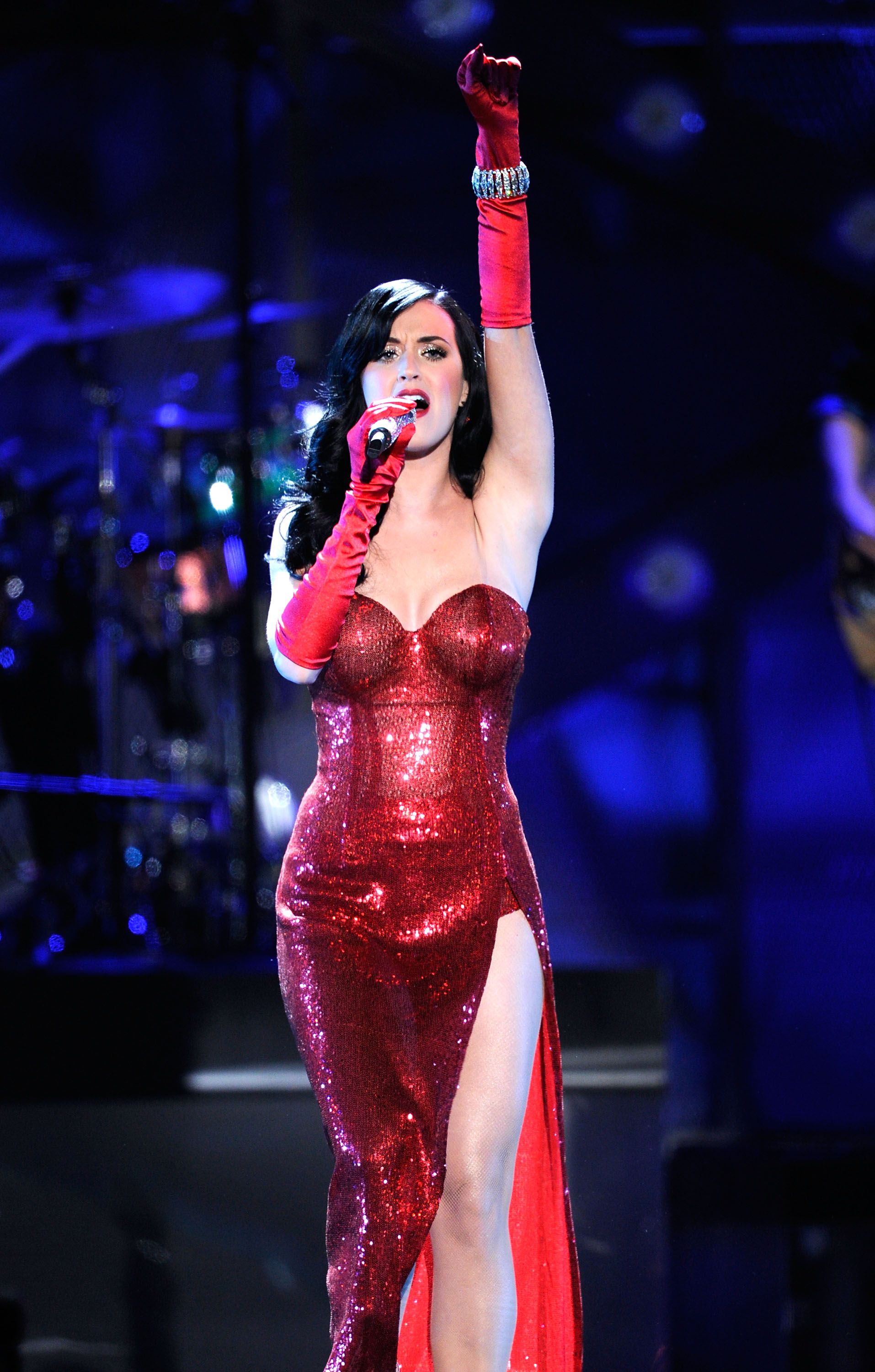 Did you know that Jessica Rabbit is technically a Disney character? She might not be a princess, but the femme fatale who can't help being drawn as a bad girl has become one of the silver screen's most popular animated female characters.

When Katy performed during the VH1 Divas Salute the Troops show in 2010, she didn't rock the Who Framed Roger Rabbit character's iconic red hair with its Veronica Lake part. However, she did dare to wear Jessica's sequined red gown with a dangerously high slit and low sweetheart neckline.

Katy totally nails her Disney night looks every time. In 2018, she decided to dress up like Snow White in a costume that stayed pretty true to the princess' original look. She looked like a Disney World employee in her long yellow skirt, puff sleeves, red bow headband, and short dark curls. However, her sense of humor was a bit more wicked than the naïve royal's.

"Someday my prince will come✨," she captioned an Instagram photo of herself and her two co-judges. "Today I got Happy and Dopey 😑 And now I'm Sleepy." 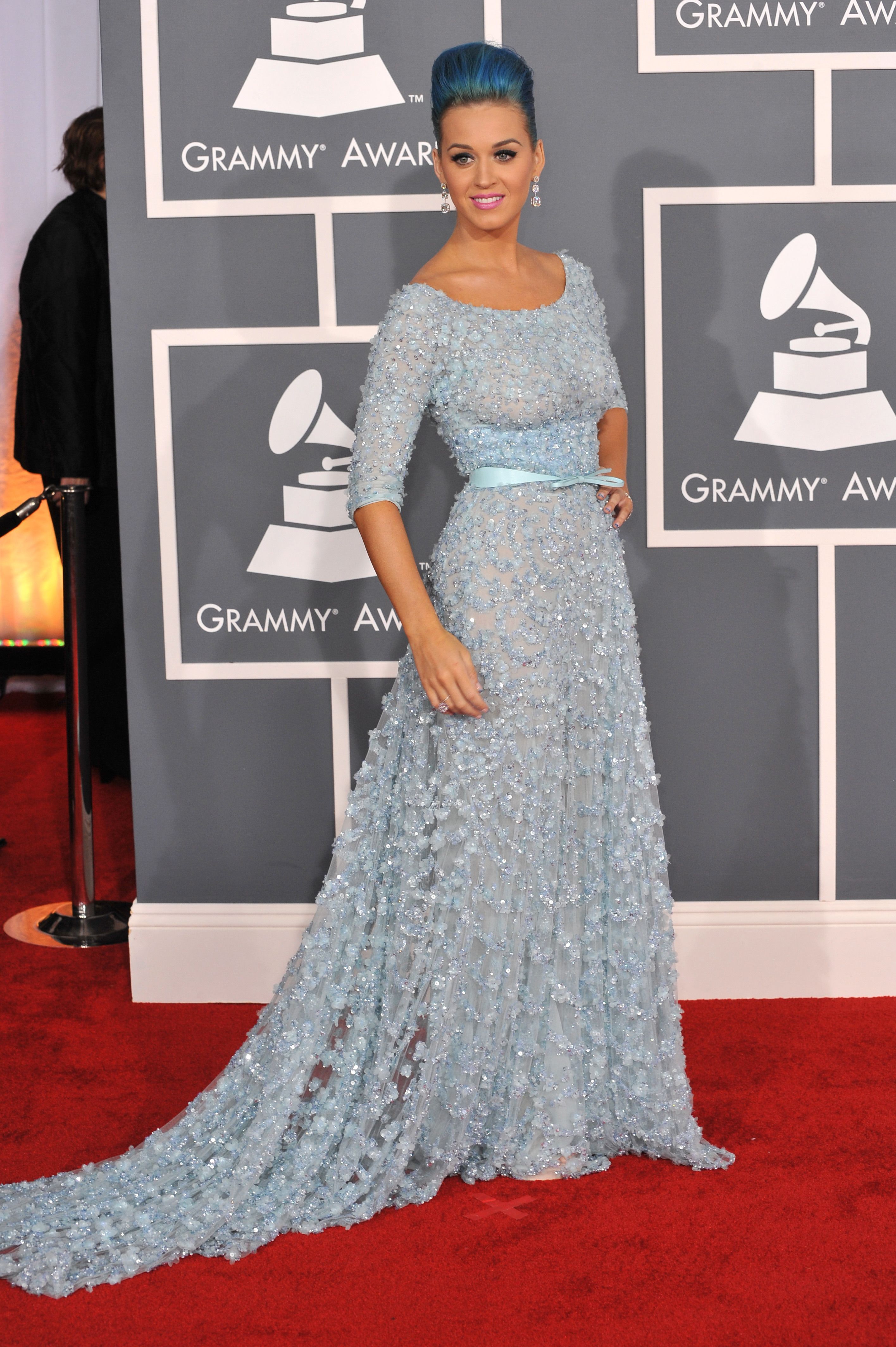 Katy was channeling Princess Elsa before Disney's 2013 smash hit Frozen was even in theaters. At the 2012 Grammys, she hit the red carpet in a textured blue gown with a long train. It was embellished with beading that shimmered like snow.

Katy's hair was swept up in the front, which made her style similar to the ice queen's voluminous blond 'do. However, the pop star had dyed her hair bright blue to match her dress. That year, she performed “Part of Me,” a song about heartbreak that it's not hard to imagine Elsa belting out, if any prince (or princess) ever dared to break her heart.

For the 2020 ABC special Disney Family Singalong: Volume II, Katy wore a costume that provided plenty of room for her growing baby bump. She also paid tribute to her impending motherhood by dressing like Dumbo's loving mom, Mrs. Jumbo. For the show, Katy performed the song "Baby Mine."

Her elephant costume included an upraised trunk on her forehead and a frilly pink hat. Since her daughter Daisy hadn't been born yet, her teacup poodle Nugget played the role of Jumbo. 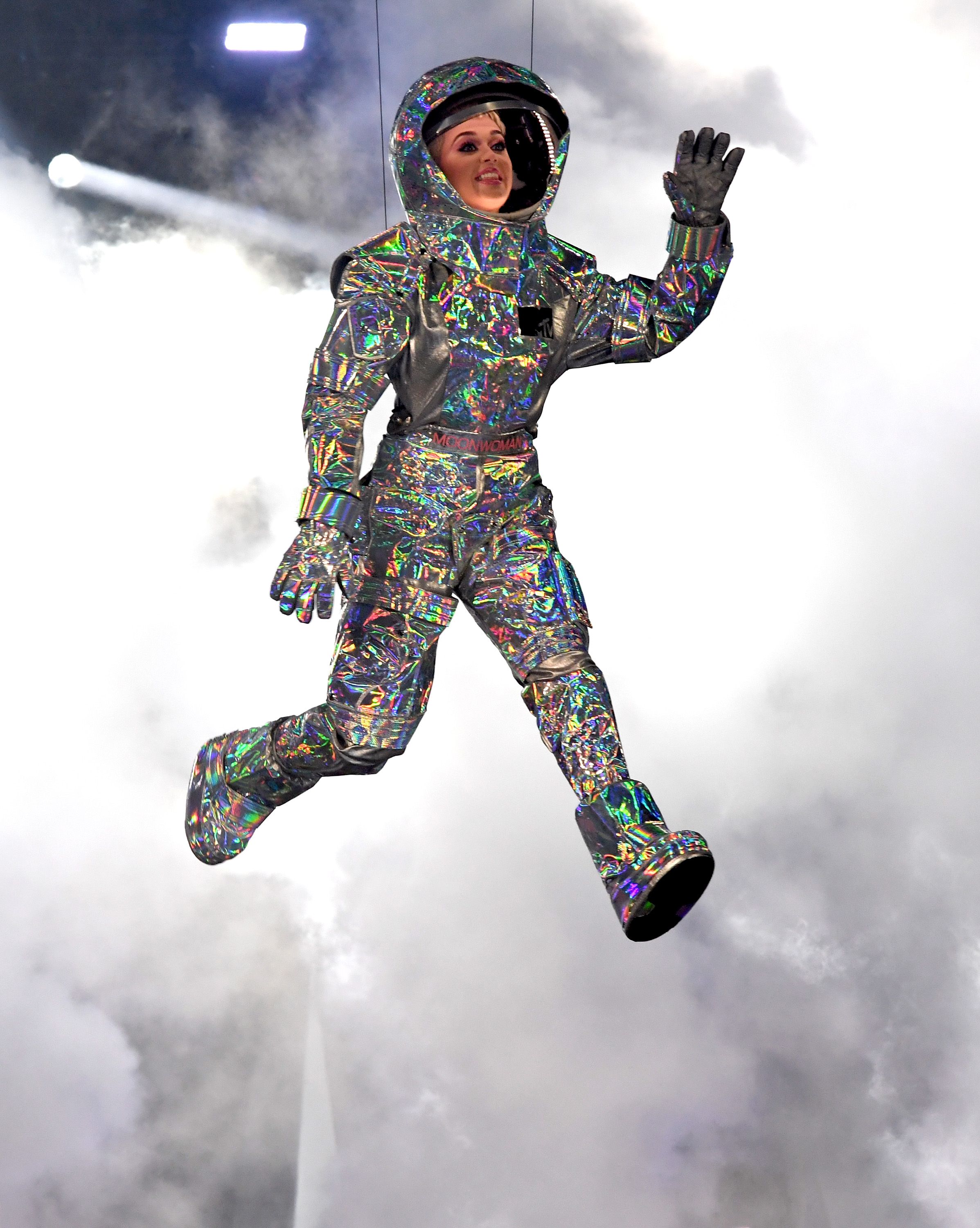 To infinity, and beyond! At the 2017 MTV VMAs, Katy looked like a futuristic version of Toy Story hero Buzz Lightyear when she rocked an astronaut costume. However, her iridescent silver spacesuit was based on MTV's iconic Moonman (although she wore a belt designating herself as a Moonwoman), not the plastic action figure who originally believes that he's an actual space ranger working for Star Command.

Once she landed onstage, Katy cracked a joke about her one-piece costume.

"My pee bag is kind of full," she quipped, according to Entertainment Weekly.

Thanks to Disney's acquisition of Lucasfilm, Leia Skywalker Organa Solo is now a Disney princess. However, it was the droid built by Anakin Skywalker, C-3PO, who Katy channeled during her fourth tour, Witness: The Tour, in 2018.

One of her costumes looked like it was crafted out of polished gold, just like C-3PO's outer parts. It included a stiff molded mini dress, arm pieces, and a pair of thigh-high boots with high heels. Katy was wearing the ensemble when she met Celine Dion backstage in Melbourne, Australia.