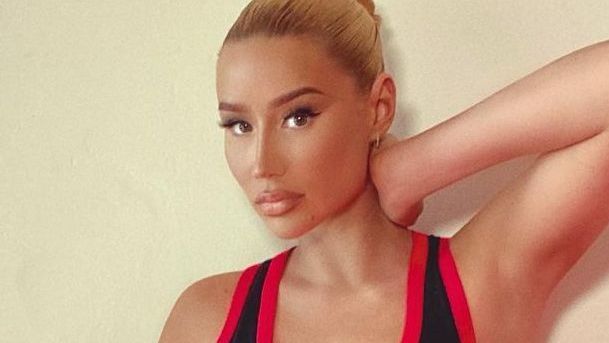 Iggy Azalea is racking up the views to her bedtime boxing over on TikTok. The 30-year-old rapper and new mom has been making headlines both for April 4-released "Sip It" track and for gushing over 2020-born son Onyx, but it was pure body attitude in her recent post, where it was skimpy crop top action and the "Fancy" hit-maker's fierce punches. Posting late at night and with nothing whatsoever in the way of glam, the Aussie pulled her punches and teased her fans - check it out below.

Scroll for the video. Iggy is fresh from being photographed munching on a Haagen-Dazs ice-cream out on L.A. streets. The mom of one, who also made headlines last year for revealing she'd dropped 20 pounds without trying, is now offering an insight into how she stays so fit.

The video, low-key, showed Iggy in slouchy gray sweatpants and a super-tiny thin-strapped white crop top. She was going fierce and throwing out the punches, with sound effects replicating hands hitting a glass panel.

Scroll For The Video!

'Happier Than Ever' Single

It's now been six months since Iggy called it quits with 24-year-old baby daddy Playboi Carti. Iggy, who trashed her baby daddy over the holidays as she alleged he abandoned his son over Christmas, is said to be happier than ever.

“Iggy has never been happier, becoming a mom has brought this deep sense of satisfaction,” a source told Hollywood Life: “Iggy is open to meeting someone, but only the right someone. She has no time for BS." Scroll for more photos.

Men 'Throwing Themselves' At Her

The source continued: "She has men throwing themselves at her but it’s a matter of meeting the right one. She doesn’t feel any sort of need to have a man. Her life is very full and happy. But if the right guy comes along, she would be open to it.”

Iggy welcomed Onyx following a secret pregnancy, announcing his arrival in June 2020. Just this month, the star opened up, admitting she'd felt like a "jerk" for not telling her closest friends she was expecting.