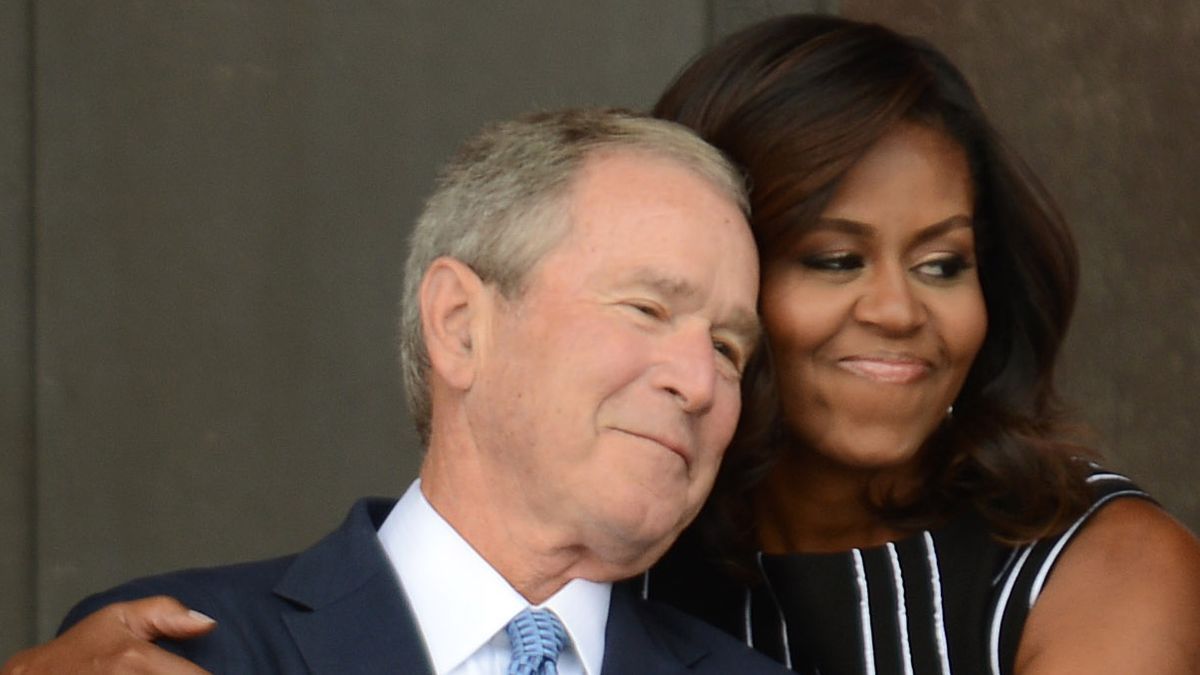 Former President George W. Bush appeared Sunday on CBS News to promote his upcoming book, Out of Many, One: Portraits of America's Immigrants.

The book is a collection of stories and portraits painted by the 74-year-old president-turned-artist.

In a wide-ranging interview with anchor Norah O'Donnell, the Republican weighed in on a variety of issues, ranging from immigration and border security to partisanship.

The public first took note of the unlikely friendship between Bush and Obama in 2016, during the opening ceremony of the National Museum of African-American History and Culture, when the two shared a warm embrace.

"The big hug, yeah," Bush said of the viral moment, recalling that the public also reacted when he passed a mint to Obama during late Sen. John McCain's funeral.

"But I think the one that became more famous is when I gave her the Altoid during McCain's funeral. And it shocked me," he said.

"The American people were so surprised that Michelle Obama and I could be friends. I think it's a problem that Americans are so polarized in their thinking that they can't imagine a George W. Bush and a Michelle Obama being friends."

According to a 2020 study from the nonpartisan Pew Research Center, the United States is a deeply polarized nation.

The study found that Americans are, in fact, more polarized than ever, establishing that Republicans and Democrats disagree on climate change, racial justice, the economy, law enforcement and a wide variety of other issues.

The coronavirus pandemic seems to have exacerbated these divisions, being that liberals and conservatives cannot seem to come to an agreement on lockdowns, mask-wearing, contact tracing, vaccines and other public health measures.

In a scathing op-ed, The Intercept's Mehdi Hasan denounced pro-Bush liberals, slamming them for praising a person guilty of "war crimes."

"This slow but steady rehabilitation of the former president, and the whitewashing of his manifest crimes, cannot be left unchallenged," Hasan wrote at the time.

"If you’re not Trump, all is forgiven?" he asked.

Bush, who supports a pathway to citizenship for undocumented immigrant, told O'Donnell that he would like to be "involved" in the immigration discussion and said that he is lobbying the Republican Party to support certain policies.

The former president conceded that his book of portraits can't change immigration policy, but said it is meant to "create a better understanding" about the role of immigrants in American society.