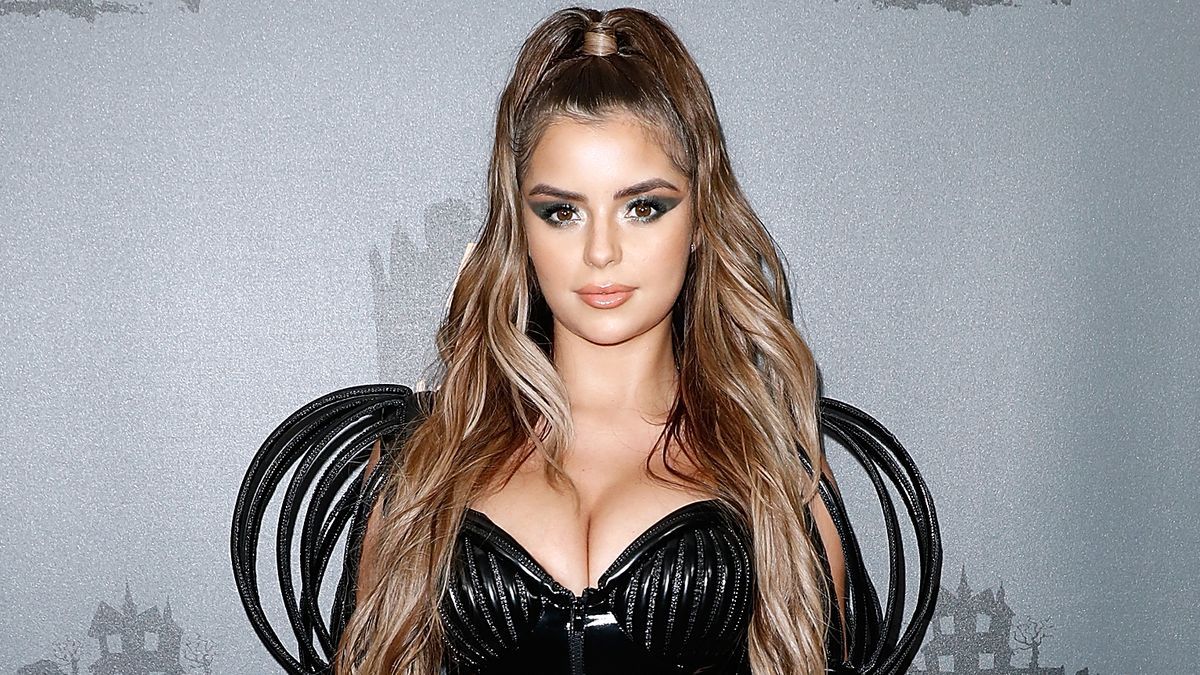 Demi Rose Mawby was a vision in white in her latest Instagram share, a triple update baring the creative touch of photographer Delphine Brunner. The British model exuded boho chic in a sheer lace-up corset that was missing its top part. The busty brunette played the game of seduction, teasing her bare chest by filling the scandalous neckline with an assortment of flowers. While the whimsical prop strategically censored her buxom curves, it turned her blooming bosom into a focal point.

Demi penned a poetic caption for her post that further drew attention to the artistic artifice.

"When you plant a seed of love, it is you that blossoms."

The eye-popping corset was from online retailer, PrettyLittleThing, which Demi represents as brand ambassador. The see-through number was crafted from a netted fabric that left little to the imagination and gave fans a glimpse of her toned midsection.

Underneath, Demi wore high-waist briefs that were fully visible through the gauzy top. While the bottoms had no trouble flaunting her curvy hips and thighs thanks to their revealing high cut, their solid fabric balanced out the transparent corset. Also of note was the thick lace-up panel in the front, which was tightly secured with a chic bow draping down.

Demi showcased the seductive look in a trio of snaps that captured her from the front. Two of the pics were closely cropped at the waist, putting extra emphasis on the saucy top that grazed just below Demi's chest.

Another photo, which can be viewed by scrolling through the embed below, portrayed the model from the upper-thigh up, showcasing her perfect hourglass shape.

Demi finished off the captivating look with a romantic hairstyle. She pulled back her long tresses into a coquettish updo, leaving several rebel tendrils to frame her face.

A Rose Among Roses

The English beauty gave off bridal vibes as she posed against a whimsical décor consisting of a cerulean backdrop painted to look like a serene sky filled with wispy clouds. Her lavish bouquet of white and pink flowers beautifully complemented her all-white attire. Their dark-green stems were tucked deep inside the corset, adding a pop of color to the shot.

Demi, who last week celebrated her 26th birthday with a trio of topless photos also snapped by Delphine Brunner, made sure to credit the artist by tagging her Instagram page. She also gave a shout-out to her makeup and hair team and tagged PrettyLittleThing.

The triple update caused a stir with Demi's 16.1 million followers, who clicked the "like" button on the photos more than 206,900 times in just 18 hours of posting. Her army of fans also took to the comments section by the masses to shower the model with love and compliments.

"You look truly very beautiful," wrote one person. "And I agree," they added, regarding her words.

"You have planted many seeds of love around the world thanks," quipped another follower.

"I would love to just sit and have a conversation with you," penned a third admirer.

"Makes me wish I was a florist," a fourth fan said of the shoot.