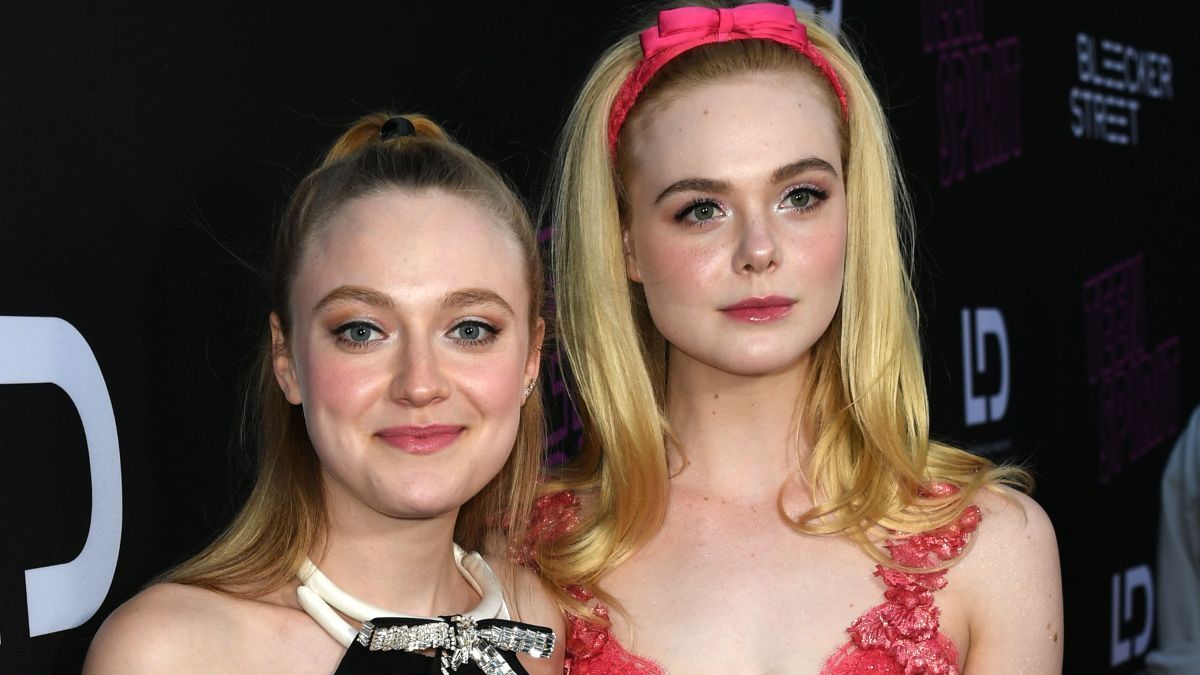 Elle Fanning proved that her older sister Dakota is an out-of-this-world talent in a sweet birthday tribute. On Monday, Elle shared an Instagram video of Dakota getting all wet while rapping the lyrics to "WAP." The Breaking Dawn star stunned her sibling's Instagram followers with her impressive rhyme-spitting skills, and she also looked super-stylish in a cute bikini. The talented actress proved that she's a pro at multitasking by cleaning her pool while she sang along with Cardi B and Megan Thee Stallion.

Elle Describes Dakota As An Advanced Lifeform From The Future 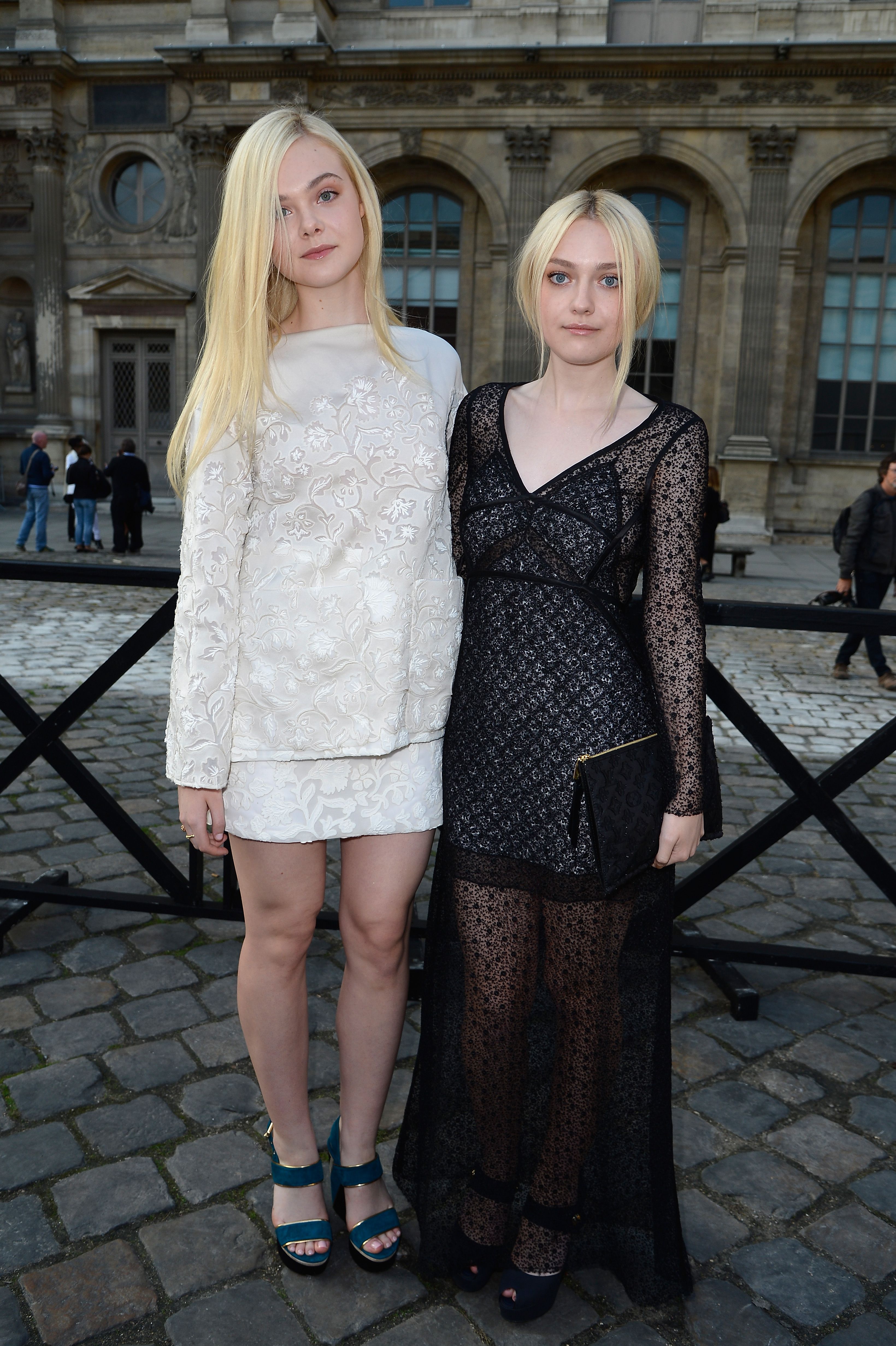 In the caption of her post, Elle paid tribute to Dakota on her 27th birthday by describing The Alienist: Angel of Darkness star as "an actual alien from the future." She went on to recount how she spoke to a psychic about her sister, writing that she was told that Dakota is "a more advanced human being than the rest of us." Per her account, the clairvoyant suggested that the former child star returned to the past "to help us all along." 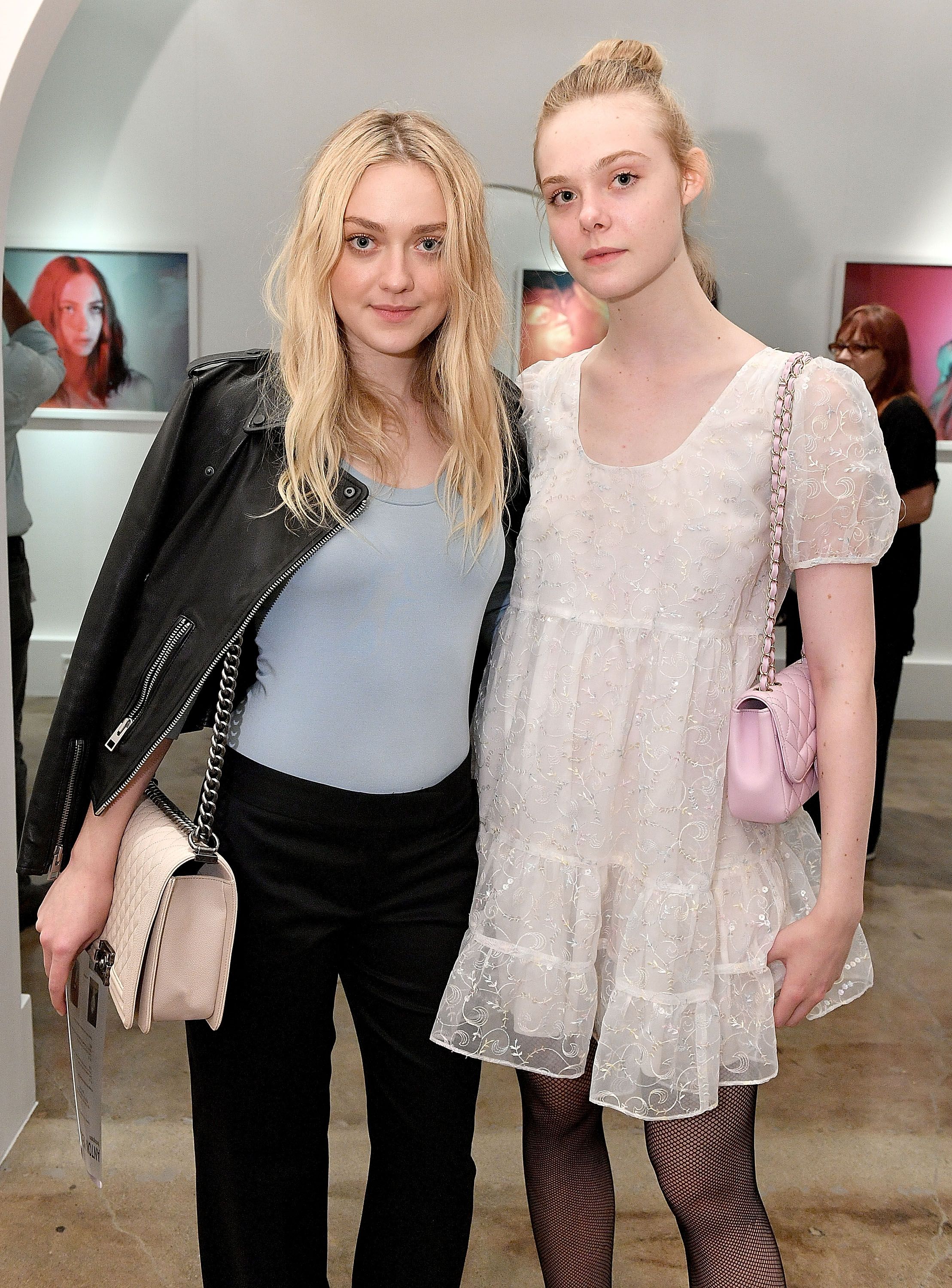 The explicit segment of "WAP" that Dakota was filmed rapping was naturally about moisture. She sang about things getting "soggy" while she gripped the long pole of a skimmer net and swirled it around in her pool. Her blond hair was drenched -- as if she'd taken a swim--  as she proved that celebrities don't pay others to do all of their dirty work. She didn't miss a beat, either.

"I ride on that thang like the cops is behind me," Dakota sang. "I spit on his mic and now he tryna sign me." 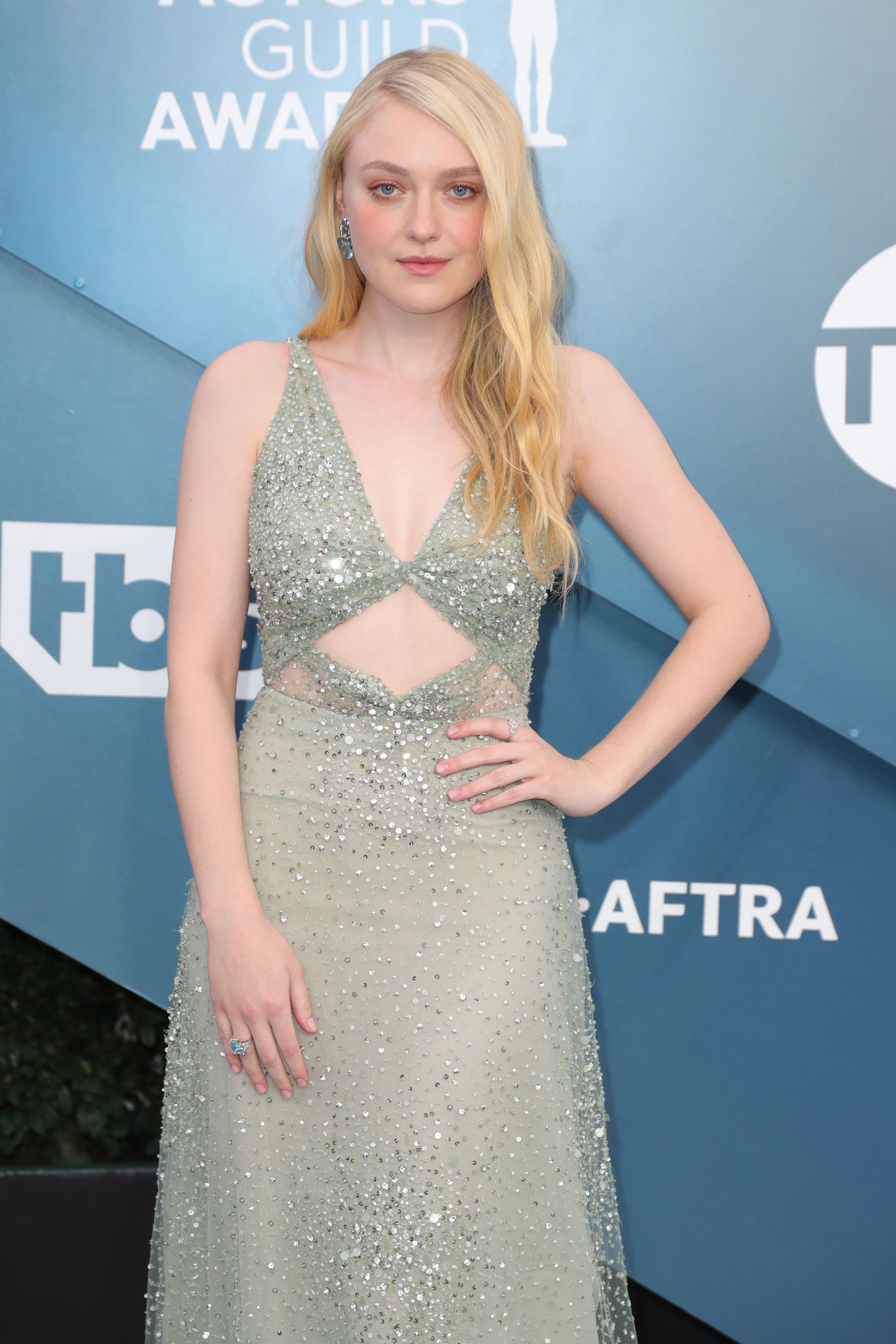 Dakota was filmed from a low angle while standing on the submerged steps of her pool. The camera panned up to reveal that she was wearing a plaid bikini that featured a vivid color scheme of fuchsia, bright orange, neon green, and yellow. Her bottoms boasted a vintage design with a modest silhouette. The piece's high waist rose above her navel, while its low-cut legs bordered on being shorts-length.

Her top featured wide sides and a structured style. It had underwire and curved cups with a balconette shape. The piece was finished with spaghetti straps. 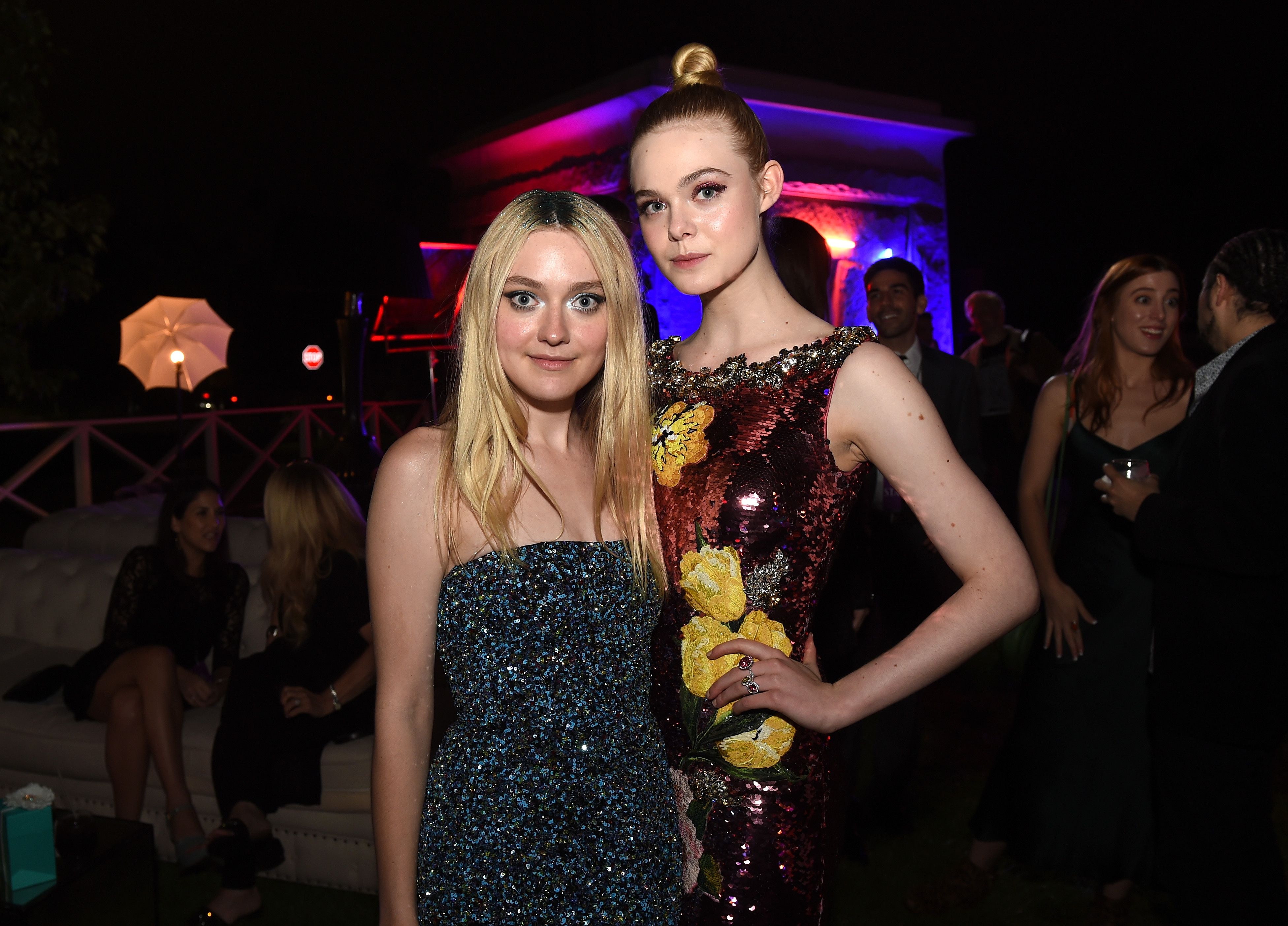 Dakota's performance received rave reviews from many of Elle's followers, who awarded the mini music video with over 400,000 likes. They also took to the comments section to wish Dakota a happy birthday. One famous face who left her a message was Chilling Adventures of Sabrina star Kiernan Shipka.

"These are some serious SKILLS," commented Elle's The Great costar Phoebe Fox.

"A WAD (wet *ss Dakota) singing WAP. I want her to sing at my birthday," read a third response to the video.

This isn't the first time Elle has delighted fans with an IG post featuring her sister. She once shared a photo of a naked Dakota sitting on the sink while doing her makeup.