Last week, President Donald Trump finally conceded his defeat in the 2020 presidential election, opening the door to a peaceful transition to a Joe Biden presidency.

Biden will be inaugurated in less than a week and Trump is set to leave office with the lowest job approval of his presidency, according to new findings from the Pew Research Center.

In the poll, which was conducted January 8-12 among 5,360 American adults, only 29 percent said that they approve of the job Trump is doing as president.

Republicans and Republican-leaning Americans drove the plunge. In August, 77 percent of them approved of his performance in the White House and only six out of 10 approve of it now.

Overall, about two-thirds of respondents said that Trump should not remain a major political figure after he leaves office.

Last week's riots at the U.S. Capitol -- which, according to lawmakers on both sides of the aisle, were inspired by Trump's rhetoric -- appear to have permanently damaged the president's political standing.

Virtually all Democrats and voters who lean Democratic said that Trump bears responsibility for the attacks on the Capitol and most of them stated that he should be removed from office. Slightly more than half of GOP voters and Republican-leaning independents said that Trump is to blame for the violence committed by his supporters.

Still, a large segment of Republican voters cast doubt on the legitimacy of the 2020 presidential election, saying that Biden won thanks to widespread voter fraud. Overall, 65 percent of respondents said that the Democrat won legitimately, dismissing Trump's evidence-free theories. 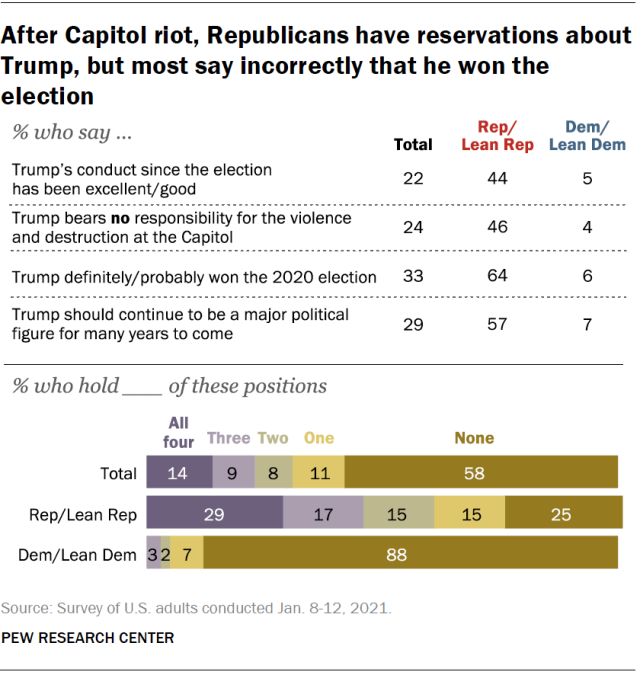 Biden will assume the presidency with relatively broad support. More than half of Americans said that they approve of the way he has explained his plans and policies.

Similarly, a majority endorsed his Cabinet picks and other administration appointments and nearly half of respondents said that they expect the Democrat to improve the way the federal government works.

The survey also found that liberal-leaning Americans are open to compromise, while those on the other end of the political spectrum are not.

"With the Democratic Party winning the White House and narrow control of the Senate, while retaining a House majority, Democrats broadly endorse efforts by Biden to forge bipartisan compromises with Republicans. Republicans, by contrast, are far more reluctant to see their party's congressional leaders work with Biden."

As for Vice President-elect Kamala Harris, the public seems split, with half of American adults saying that she is qualified for the position and a slim majority stating that they expect her to have "the right amount of influence" in the incoming administration.
Latest Headlines