The hosts of Fox & Friends Weekend blasted Saturday Night Live on Sunday morning, October 14, for its characterization of Kanye West as crazed and mentally ill for statements he made and the mannerisms that were on display during his meeting in the White House with President Trump this week.

As The Inquisitr previously reported, news has been buzzing about Alec Baldwin making his anticipated comeback and how he returned to form with his portrayal of President Trump alongside Chris Redd, who played Kanye West, and Kenan Thompson, who came through as NFL legend Jim Brown. But not all of the noise has been welcoming of the thespians’ work, with many – particularly on the right – expressing disapproval over the nature of West’s caricature and some of the dialogue delivered in the sketch.

Pete Hegseth, for one, found the presentation to be typically dismissive of anyone who shows support for the President as being extreme on either of two ends, stating, “They use comedy to push an agenda. If you support this president you are either crazy or you’re racist. Those are the two boxes! So, Kanye can’t be racist, then he’s got to be crazy.”

The conservative television personality had no trouble garnering the approval of his Fox & Friends co-hosts with the assertion. 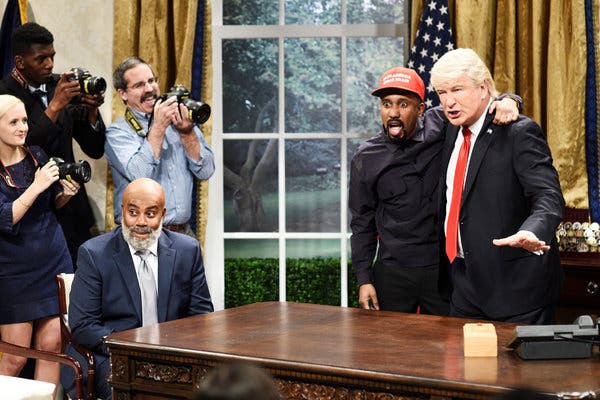 However, what really triggered Hegseth’s colleagues to pile on to the Lorne Michaels show was what they called out as hypocrisy in the way SNL invoked and seemingly mocked Kanye’s mental health, with Baldwin’s Trump character at one point thinking aloud about ordering the rap producer’s lunch from a pharmacy.

“And then they throw [Kanye’s] mental health into it,” Hegseth would continue.

“When it’s an issue they take seriously all day long until it’s about time to make fun of someone who’s being open, earnest and honest with the president of the United States in the Oval Office.”

Chris Redd’s imitation of West was mocking of some of the more outlandish statements he’s made in recent weeks. He claimed to make the meeting by flying in with his Make America Great Again hat, which was a nod to West recalling how the red cap made him feel like Superman during Trump’s campaign for the Presidency. At another point during the sketch, Redd reenacted the moment West showed the President a hydrogen-fueled plane that Esquire confirms to have really been designed by Apple – only, Redd told the President it was invisible when asked where the aircraft was.

“Your point about crazy or racist is well taken. That is exactly the box,” Trish Regan agreed, adding, “Oh, I forgot dumb. You are either crazy, racist or dumb.”