Will Kevin Bacon Play Freddy Krueger In Yet Another 'Elm Street' Remake?

Just six years after the remake of Nightmare on Elm Street that flopped at the box office, New Line Cinema has reported another remake is in the works. But if horror fans have their way, they might consider a big Hollywood star to take on the role of evil madman, Freddy Krueger. Since the original Freddy, Robert Englund, has made it clear he has no interest in ever playing the character again, a fan's suggestion that Kevin Bacon might be a great casting choice for the role is going viral, and it seems Bacon himself might be inclined to consider an offer, according to Bloody Disgusting.

So horror fans want to know — will we be seeing Kevin Bacon as Freddy Krueger in the near future? Or is he just toying with us? The answer may lie on Twitter, as with many Hollywood rumors. 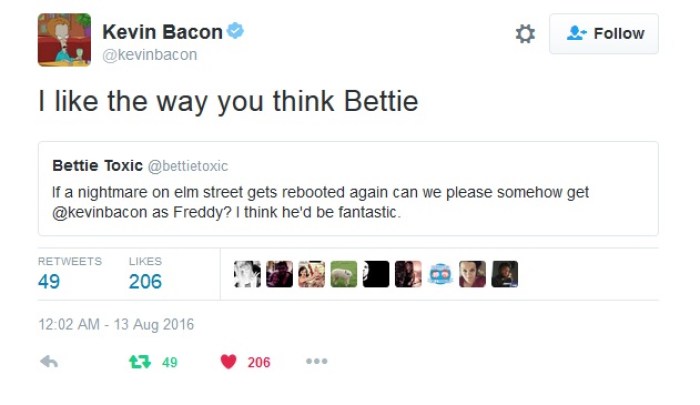 Just the mere possibility that Bacon would play Krueger sent horror fans into a feeding frenzy of comments, largely positive except for the few naysayers that just don't want a remake under any circumstances. Commenter Zachary Paul was definitely on board.

"This wouldn't have been an obvious choice to me but it works. He can play creepy and sinister as well as over the top and unhinged. This would be perfect. Yes, please. New Line take notice."

Some fan reactions were considerably less subdued, losing their minds at the mere thought of Kevin Bacon playing Freddy Krueger. The actor actually has a considerable resume in the horror field, as pointed out by Sommerleigh Pollonais.

"Yes! They need to jump on this sh*t now! RIGHT NOW! Stir of Echoes, Hollow Man, The Following and he got his start in films with Friday the friggin' 13th. THIS IS THE NOES remake I want to see."

Bacon has also starred in such horror films as Flatliners, The Darkness, and Tremors, where he's reprising his role in the upcoming Tremors TV series, which he is also producing. So Bacon is definitely not a guy who thinks he's too good to play around in the horror genre.

The original Freddy Krueger, Robert Englund. [Photo by AP Photo/Chris Pizzello]Other horror fans noted that Bacon seems to be able to pull off a mix of evil and humor that became a trademark of the original Freddy Krueger character, although unfortunately, the remake dropped that wicked sense of humor. That may have been a big contributing factor to its critical and box office failure. Rohan Sorensen thought Bacon might be the solution.

"Honestly, Jackie Earl Haley was way scarier than Robert England (sic) as Freddy, but the problem was that he wasn't Freddy. Freddy has a sense of humor, which is what Haley was lacking. Kevin Bacon can be pretty funny, and in a similar vein to what Robert England (sic) brought to the table. He would make a great Freddy."

Other fan suggestions for the role include Michael Cera, Billy Bob Thornton, or Willem Dafoe, and some other horror fans felt that Jackie Earle Haley wasn't the problem with the 2010 remake, but poor directing and scripting. Willem Dafoe has certainly shown he can be a demented madman with humor, but it's a bit hard to see Billy Bob Thornton in that role, or even considering it, given he gravitates to more, shall we say, critic-friendly material.

With so many fans showing such great enthusiasm to see Bacon as Freddy Krueger, it may prompt New Line Cinema to approach the actor, even though the tweet was probably meant to be tongue-in-cheek. But who knows, if enough fans show interest and support, it may happen.

Horror fans tend to be a group who loves nostalgia and references to previous classic films, which already makes Bacon a favorite and could even win over the hardcore "no remakes ever" crowd. You know that old foodie saying, which may apply here... everything's better with Bacon. But let's hope that if New Line Cinema actually does cast Kevin Bacon in the role, they don't decide to throw in a cheeky, Footloose-esque dance number. That would be taking the nostalgia and humor a little too far.