UFO researchers online regularly comb through NASA Mars photos in search of bizarre anomalies and alarming alien artifacts that, they say, are regularly hidden deep in the images transmitted back to Earth from the Red Planet by the Curiosity Rover — the unmanned, robotic vehicle that constantly rolls around the planet’s surface surveying the Martian terrain.

But the latest such “discovery,” announced Monday on the popular UFO Sightings Daily site — perhaps the most comprehensive online catalog of UFO and alien anomaly incidents — may take the prize as the most bizarre alleged alien artifact of all.

UFO researchers, including the prolific proprietor of UFO Sightings Daily, Scott C. Waring, argue that extremely ancient civilizations existed on Mars, possibly as long as millions of years in the past. These ancient civilizations, though long destroyed, can be traced through artifacts that turn up frequently in NASA photos — but whose existence are never acknowledged by the space agency, for some reason.

But if ancient civilizations existed on Mars, it only makes sense that the million-year-old Martians would experience the same bodily urges as all other known living beings — and would need to use a toilet.

Here is the original NASA photo in which Waring uncovered the toilet seat, which he says lies just three meters or so from the disembodied statue of a face, another Mars artifact partially buried in the planet’s sand.

And here is a closer view of the “toilet seat.”

For those still unconvinced, or who just can’t see what looks like a toilet seat partially buried on the surface of Mars, in the following video, Waring himself goes through the photo, clearly explaining his latest finding.

“Guys, I found this toilet like seat on Mars today. I just call it that because it looks like it,” Waring wrote on his blog on January 11. “It’s actually a stone ring with one side that has an opening. The ring has lines that are carved into the stone which prove it was made by intelligent beings. Also there is a face to the left of it I highlighted in yellow. The face is fallen over, but still easy to see. Its very close to the rover, about 3 meters away. The stone face is about one meter across from top of forehead to its chin. It has an extended forehead much like many eyewitness accounts of aliens.”

Here is the highlighted version of the photo mentioned by Waring in his above explanation. 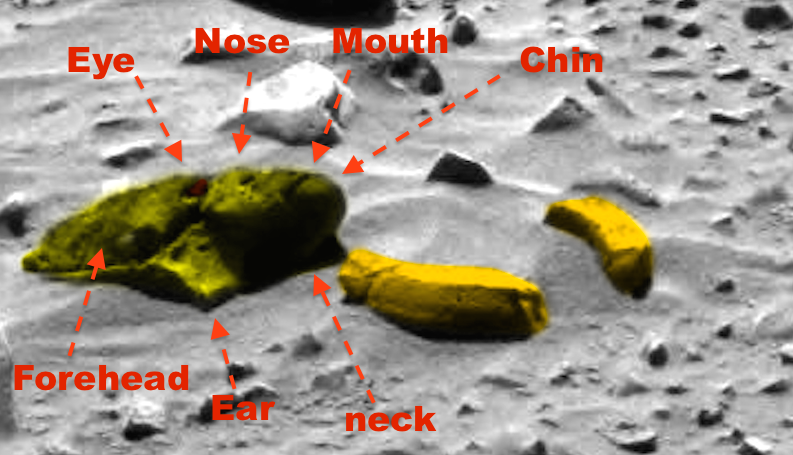 Not everyone immediately got on board with Waring’s latest discovery, however. Even for followers of his YouTube channel, the apparent discovery of a bathroom artifact was a bit much.

“I now visit your site to get a good laugh and boy you sure delivered,” wrote one commenter on the “toilet seat” video’s YouTube page. “Toilet seat on Mars. Ummm ok. Are you freaking serious?”

In fairness, however, Waring never commits in his video or on his UFO Sightings Daily blog to definitively describing the artifact as an actual toilet seat. Instead, he simply refers to the “ring” as “toilet seat-like.”

The latest “toilet seat” finding joins a long list of Mars discoveries from the fine-tooth-comb analysis of NASA photos posted on UFO Sightings Daily. Others have included a Buddha statue, a coffin, numerous human and humanoid faces — including the one seen in the images above — and even a “scorpion like creature.”

[All Photos By NASA]

Draya Michele Flaunts Her Curves In A Cut-Out Swimsuit While Posing On Mossy Rocks January 16, 2021