A top online UFO expert says that the NASA Mars Rover "Curiosity" has found hard evidence not only of life on the Red Planet, but of a sophisticated living creature that resembles a scorpion. The photo was snapped by the Mars Rover's on-board camera on September 10 and posted to the popular UFO Sightings Daily site on Sunday, September 13.

"Life on mars... sure it sounds strange, but why? Because were were taught by our government that life doesn't exist on other planets," wrote the site's founder and editor, Scott C. Waring, on Sunday. "We have been programed to think they are correct. Don't challenge authority, not when so many trust it. Well, I was one of the trusting long ago, but that all changed when I found things in a Mars photo."

Before getting to Waring's latest find, it should be mentioned that his site has posted NASA Mars photos before, purporting to show evidence of alien life. In January, as documented in this earlier Inquisitr report, Waring presented a photo that appeared to show what was either an unusual rock formation — or a series of quonset-hut style structures that could serve as dwellings.

Not only is there life on Mars, according to the findings of Waring and other UFO hunters, there is also death. Last December — again, documented in a previous Inquisitr report at this link — the UFO Sighting Daily blog revealed what appeared to be an "alien coffin" simply lying exposed on the planet's surface.

As for the latest finding exposed by Waring, it derives from this NASA photo.

While nothing resembling a living creature may be immediately visible in the image of a vast rock field on the surface of Mars, zooming in closer, this is what Waring perceived. 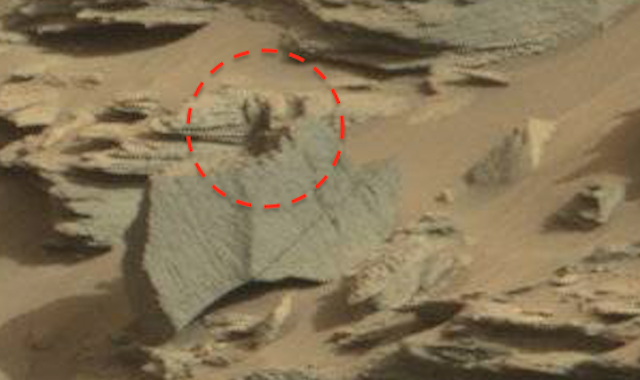 "In this photo (Sol 1100) I found a living creature, with a black exoskeleton, much like a desert beetle or scorpion might have," Waring explained on his blog.

"The creature is sitting on top of a rock, so that it can see farther away, probably for hunting purposes. It also has one upraised arm wit three claws on its end. It probably didn't move while the rover was there, since it would be conserving its energy. Movement would be reserved for hunting...surviving." While the UFO expert's finding of an "alien creature" on the surface of Mars seems incredible, NASA did announce earlier this year that the Curiosity Rover has found at least evidence of the molecular "building blocks," such as nitrogen compounds, that form the basis of life.