A strange and massive stone monument discovered on the floor of the Mediterranean Sea is evidence of a civilization that existed there as long as 10,000 years ago, according to the archaeologists who made the discovery — a mysterious civilization that was submerged by the sea, just as in the ancient legend of the lost civilization of Atlantis.

Scientists from the University of Tel Aviv discovered the "monolith" last year, sending divers more than 130 feet down off the coast of Sicily after spending a year mapping the sea floor with sonar technology.

The giant stone structure lies on an underwater island known as Pantelleria Vecchia Bank, which scientists believe was home to a thriving ancient society until a massive flood drowned the island sometime around 7,500 B.C.

The object, which can be seen in the photo montage from the University of Tel Aviv, below, is now in two pieces, but the archaeologists believe that the way the two pieces appear to fit together leaves no doubt that they were once a single structure several feet long or high.

The object also has what appears to be a deliberately crafted hole in one end. 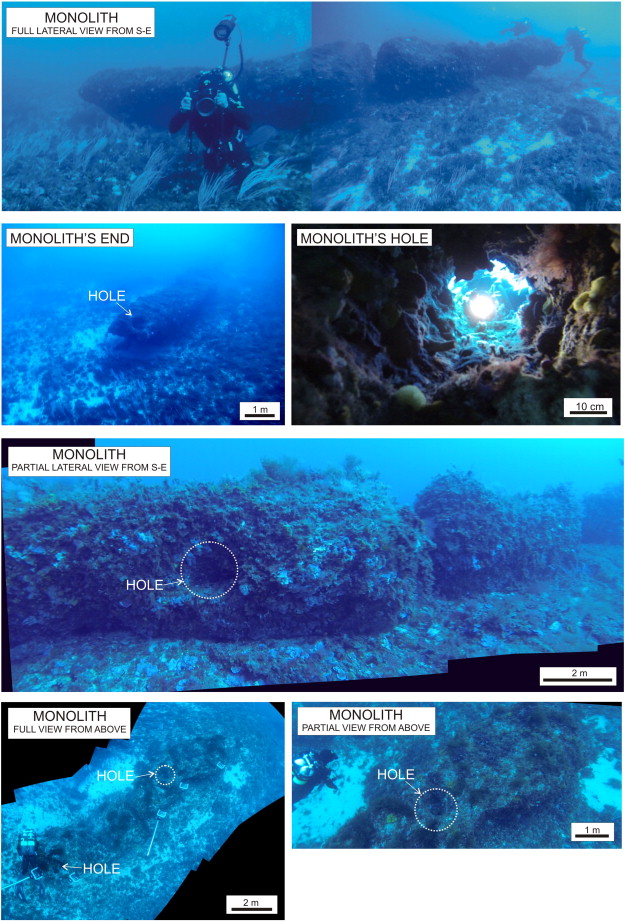 The scientists still don't know how the monument was positioned a hundred centuries ago. They still have not come to any firm conclusions about why it was created and what it meant to the people who constructed the monolith. They speculate that the structure could have been "some sort of a lighthouse or an anchoring system."

But they are certain the monolith was created by human hands.

"The monolith found, made of a single, large block, required a cutting, extraction, transportation and installation, which undoubtedly reveals important technical skills and great engineering," wrote the team led by Zvi Ben-Avraham.

"The belief that our ancestors lacked the knowledge, skill and technology to exploit marine resources or make sea crossings, must be progressively abandoned," the scientists wrote in a paper published in the current issue of the Journal of Archaeological Science: Reports.

The tale of Atlantis, an ancient civilization that sank into the ocean, was first written by the Greek philosopher Plato in 360 B.C. The Plato version was a highly mythologized story of a utopian society inhabited by beings who were half-human, half-god.

But scientists and historians have long doubted that the story had a basis in real events.

"Pick a spot on the map, and someone has said that Atlantis was there," Charles Orser, historian at the New York State Museum, told National Geographic. "Every place you can imagine."

Earlier this year, NASA discovered what some observers called a "Stonehenge in space" on the comet 67P.

If anywhere serves as a candidate for a historical basis for the Atlantis myth, it could be the coastal areas of Sicily which, according to the researchers who uncovered the underwater monolith, is a location where "the consequences of changing sea-level were most dramatic and intense."