A UFO "orb" appears on video taken by the NASA camera positioned outside the International Space Station, and a prominent online UFO-watcher spotted the eye-catching anomaly and posted it to YouTube on Monday, adding to the lengthy list of strange sightings outside the spacecraft that has been orbiting about 250 miles above the Earth for nearly two decades.

But in recent times, thanks to technology which allows NASA not only to position cameras on the space station but to live stream feeds from those cameras back to Earth and broadcast them instantaneously via the World Wide Web, UFO hunters have found a bonanza at the space station, with new UFO sightings reported every few weeks.

In the three-month period between October of last year and January of 2015, four distinct sightings of UFO objects were recorded on NASA video, giving rise to numerous conspiracy theories claiming that NASA is fully aware of alien spacecraft that visit Earth or fly above the planet's atmosphere — but the space agency is covering up this secret knowledge.

The latest UFO hovering near the space station was spotted by Streetcap1, whose YouTube channel has cataloged dozens of sightings and alleged sightings of unidentified objects in the vicinity of the International Space Station.

The video, viewable above, was then reposted by blogger Scott C. Waring, editor of the popular site, UFO Sightings Daily.

Waring took screen captures from the video, images that he says reveal the "orb" floating outside the space station. 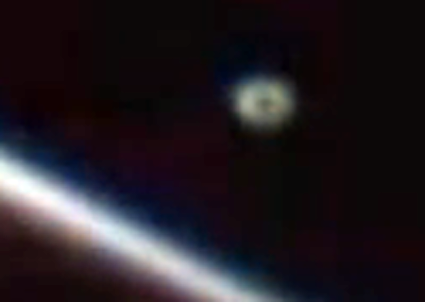 This capture shows the orb's position in relation to the space station. 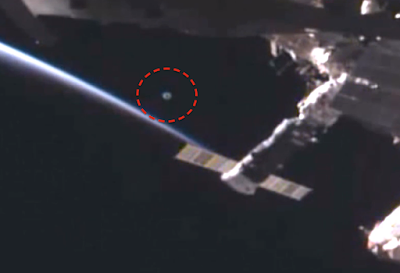 "Orbs are not uncommon at the space station. They actually stop by frequently. I would estimate that there are about 2-6 orbs per day, but watching 24 hours of ISS footage is hard to do."

As Waring points out, the new video is far from the first sighting of an "orb" UFO on Space Station video footage. In one of the most convincing sightings, NASA astronaut Chris Cassidy, on August 19 of 2013, created a sensation when he told mission control that a UFO was floating just outside the space station window.

Video of that UFO can be seen at this link. But Russia soon debunked the sighting by the NASA astronaut, explaining that the UFO was one of Russia's own radio antenna caps that had come free.