The Paul Walker “ghost” photo has caught the attention of millions via social media. According to Mirror Online, the touching image, which pays homage to the fallen star who died in a fiery car crash, was created by a fan named Jeffery Raymond Frohlich.

The altered image shows Walker’s Fast & Furious co-star Vin Diesel leaning against the famed Dodge Challenger from the film. However, he’s not alone in the photo, because a spectral Paul Walker is standing right beside him. Ironically, the photo coincides with Vin Diesel’s heartwarming tribute at the MTV Movie Awards on Sunday, April 11. 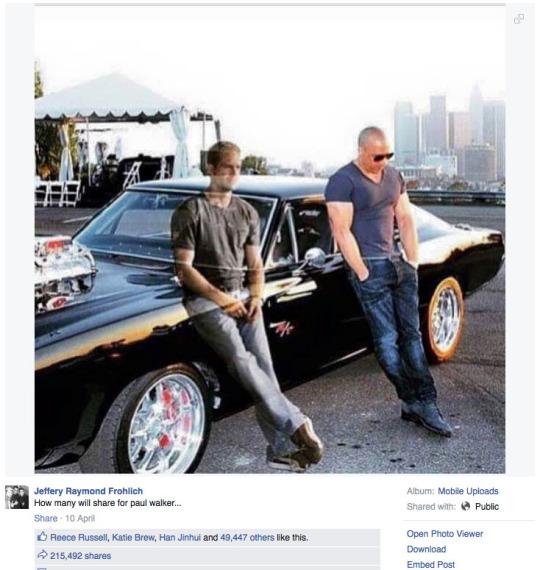 On April 10, the Paul Walker ghost photo surfaced on Facebook. Now, it has more than 50,000 likes and over 227,000 shares in less than four days. As the photo continues to circulate on several social media platforms, many fans have decided to write their own tributes to the fallen star. Some have even shared their reaction to the ghost photo. Although some fans find the photo to be a bit creepy, most insist it is a beautiful image and it never looked better!

Here’s what fans are saying about the Paul Walker “ghost” photo:

@DailyMirror he's alive in our hearts :(

On November 13, 2013, Paul Walker was killed in a car accident. Fast & Furious 7 was in mid-production at the time of his death. Although the film was delayed for months because changes had to be made due to Walker’s untimely death, the film still turned out to be a big success. The duration of Walker’s performance in the film was completed with the help of stunt doubles and computer generated imagery. Nevertheless, the film did not disappoint and the numbers definitely don’t lie. According to Hollywood Reporter, the film has earned a whopping $800.5 million in just its second weekend at the box office.

What do you think about the Paul Walker ghost photo? Share your thoughts.