While Vladimir Putin fights a proxy war against Ukraine and repeatedly confronts Western allies with fighter jets and submarines, a new report says that the Russian president has another, more secret weapon — an army of internet trolls who post fake messages on blogs, social networking sites, comment sections and pretty much anywhere they can sneak in pro-Putin propaganda and the Russian government’s party line.

According to the report in The Guardian newspaper last week, Putin’s paid bloggers — who work 12-hour shifts under the intense scrutiny of “editors” who discipline them for everything from plagiarism to tardiness to minor variations from approved Putin talking points — have posted an incredible variety of government-approved fake messages.

The bloggers work in small teams out of a single building in St. Petersburg, and the trolling operation operates 24/7 according to the report.

Though their working conditions are not great, the Putin internet trolls actually make a decent living, by Russian standards, flooding the internet with Pro-Russian, anti-American covert propaganda. The internet corps is so secret that the government doesn’t want anything on the books that might reveal its presence.

As a result, the online trolls are paid under the table, free from taxation on their incomes that according to whistleblowers who spoke to the Guardian can typically reach about 45,000 rubles — or about $790 per month.

That salary is about one-and-a-half times more than the average Russian worker’s salary of about $536 per month. And of course, with no obligation to pay taxes on their earnings, Putin’s internet posters do even better than that.

The personal income tax rate in Russia is 13 percent, meaning a typical worker takes home just $466 each month, compared to the full $790 that goes to the internet trolls who keep busy spreading online “jokes” like this one, showing Obama and with Ukraine President Petro Poroshenko. 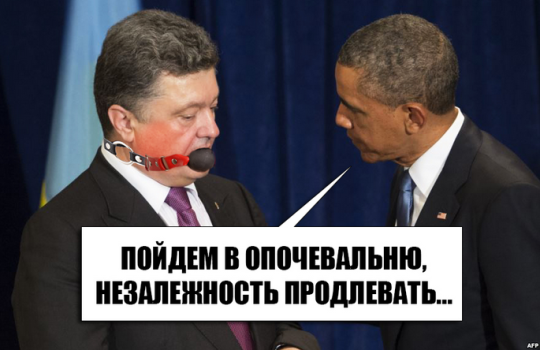 The voice balloon, in English, reads, “Let’s go to the bedroom and work on your independence.”

Another Obama “meme” ridiculed the allegedly small size of the U.S. president’s penis, while still another portrayed Obama as a monkey.

But Obama is far from the only target of Putin’s propagandists. Russian opposition leaders, U.S. State Department spokespersons, and a wide variety of others also come under troll attacks, while other posts enthusiastically tout Putin’s achievements and conspiracy theories about foreign influence undermining the Russian economy.

The bloggers are under strict orders to post only positive comments about the pro-Russian rebels currently fighting against the Ukraine government, in a war that has claimed more than 6,000 lives in the past year — a war in which Vladimir Putin has repeatedly claimed he is not involved.

Kara Del Toro Teases A Glimpse Of Sideboob As She Goes Braless Underneath A Slinky Backless Dress January 25, 2021