Does Bryce Harper Need To Grow Up? 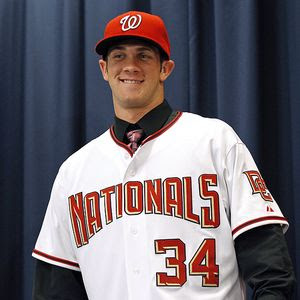 Bryce Harper, the Washington Nationals' youngest outfielder, has an attitude. Manager Mike Rizzo, told the Washington Post that, "there's a cocky bone in there, and there's an ego bone. And there are other bones….but there's not a malicious bone in his body."

Consider this: is it normal for a 19 year-old male, who just signed a $9.9 million dollar contract with a minor league baseball team to have an ego? I believe the answer is yes.

Therefore, the question is not so much about Bryce Harper's attitude being malicious, but about his maturity level. Harper's actions, such as blowing a kiss to a pitcher as he rounded the bases for a home run, show that he has a long way to go before he has the professionalism of Randy Johnson or Ichiro Suzuki, famed for both their ability to play the game well, as well as their mature attitudes.

Harper is not the only young sports star that has been thrown into the spotlight for his attitude and likely will not be the last. Rizzo also mentions that the club is currently working with Harper to cultivate a more professional public image.

Bryce Harper's comment about his attitude is simply this "I'm going to be my own person. There are a lot of professional athletes back in the old days that did what they wanted to do. That's how I'm going to be."

I believe we will see a lot more from Harper in the years to come, and that his attitude will change from that of an up and coming 19 year-old star who just had his big break, to that of a seasoned professional athlete.