Did a UFO crash on the surface of Mars sometime in the distant past? Or maybe on the not-so-distant past? A set of NASA photos snapped on the surface of our mysterious neighbor in the Solar System look to a UFO hunters to be solid evidence of a downed alien spacecraft that must have hit the Martian surface so hard that only its tail was left visible above the surface.

Last summer, another supposed UFO on Mars raised the hopes of the alien-hunting community, when photos sent back from Mars appeared to show a blazing white dot descending toward the barren surface of the planet.

But though NASA usually keeps it collective mouth shut when it come to UFO sightings in its jurisdiction — that is, Mars, the International Space Shuttle or even the sun — this time NASA stepped in and debunked the supposed UFO sighting as just a photographic glitch known as a "hot pixel."

"Hot pixels appear in a photograph as bright spots that are out of place when compared to the rest of the image," reported Britain's Daily Mail newspaper at the time. "They are caused by camera sensors getting hot during long exposure images."

Because of its lengthy exposures, the camera on the NASA Mars Curiosity Rover is especially prone to hot pixels showing up in its images from the surface of the Red Planet.

"This crashed UFO is not a glitch in the photo process. It was found in three photos on the NASA site... This anomaly on Mars is very unusual in its design. It has a shape like a whale tail or a giant goblet. I really wish the rover would take a look at it, but it seems this is as close as the public will get."

Here is one NASA photo showing the "tail" in the distance, to the upper left of the image. In a magnified version by Waring, the alleged UFO tail looks like this. 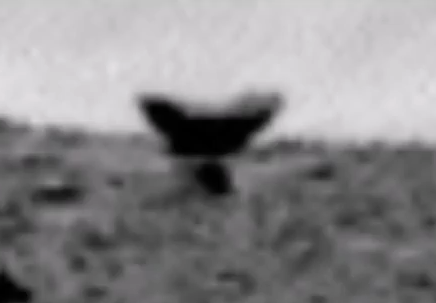 Here is another NASA photo. Note that the alleged UFO tail is to the right of this picture, proving that it can be photographed from varying angles and is not simply a "glitch." Finally, one more view, with the the "tail" once again clearly visible to the upper left of the picture. The alleged UFO crash may not be a photographic glitch. But it may simply be a rock. In any event, the always prolific UFO hunter Streetcap1 compiled the NASA Mars photos into a video, which may be viewed above on this page.

Adam Kinzinger Says He 'Would Love To' Move On From Trump, But He Is Still Leader Of GOP

Denise Richards Shares What 'Scares' Her About Teen Daughters