On Tuesday, a number of pictures of rocks on the surface of Mars were purported to show a statue of an animal and a possible religious symbol. According to a post by UFOSightingsDaily, a stone statue of a lamb and a cross carved in another rock were discovered by a user on the GigaPan website. The well-aged stones rest on Mars’ hostile surface, and the image shows what is being interpreted by some as evidence of ancient relics.

Scott C. Waring shared the GigaPan Mars images after what he says was an incidental discovery. He began studying the site for one thing, but found the unusual images from Mars instead.

“I was checking through some Mars Gigapan photos and found some interesting anomalies. The cross is actually on a rectangle stone, similar to a sign at the entrance of a church. Nearby there is a lamb like creature weathered by time. No, I am not a religious man, but I have always believed that Jesus was actually an alien trying to instill morals and ethics into the barbaric human race. I was actually looking for ancient writing, but found the cross instead.” – SW 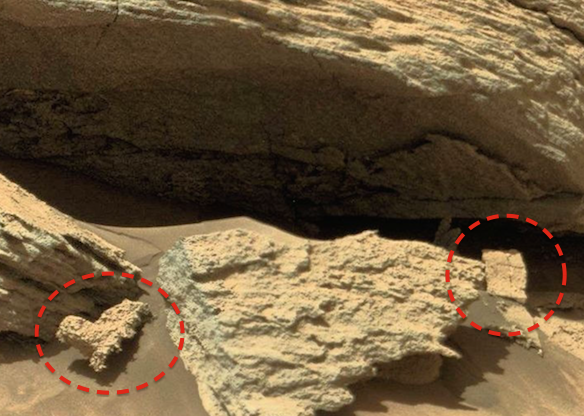 Readers weighed in on the GigaPan pictures of Mars, and the responses are mixed. Some are convinced the images from the Mars Rover clearly show evidence of a lamb and cross. Others believe the snaps are simply tricks of the eye due to shadows. Still, others think the photos are manipulated with image editing software, and thus, trickery is involved (explore the interactive image and judge for yourself).

“I would say the cross and the lamb definitely look out of place. Not so sure about the others. The lines of the cross are distinct. The lamb doesn’t fit in because the texture is different from neighboring artifacts. Of course it could just be a piece of space rock that some time ago got hot to the point of melting and eventually ended up on Mars. On the other hand, the fact that the objects are so close to each other is interesting. It would also be interesting to know the size of these objects.” – Werner Griessbach

“Because it’s a coincidence that the shadows look like faces. Those “faces” that are circled look like something a 2-year-old would draw. Mere coincidence, you are seeing what you want. And the “lamb”, please, it looks like something out of a cartoon” – Anonymous

The Mars Curiosity rover has attracted quite a bit of attention lately. Recently, NASA’s mobile laboratory allegedly found compelling evidence of archaic sculptures and fossils on the red planet’s surface. The stone remains are being described as the Mars “cat statue,” which may support the belief that life exists or once existed on the planet.

The Gigapan website was created to allow the business community to assist NASA in the exploration of the universe. “Gigapan was formed in 2008 as a commercial spin-off of a successful research collaboration between a team of researchers at NASA and Carnegie Mellon University. The company’s mission is to bring this powerful, high-resolution imaging capability to a broad audience.”

The technology used to capture the images of the cross and lamb-like sculpture is employed by the three NASA rovers, Curiosity, Spirit and Opportunity.

Share your comments below about the Mars GigaPan images. Are they authentic ancient statues/carvings, a trick on the eyes or simply Photoshopped?