A gigantic UFO appears to blast out of the sun in the above video of NASA solar images. But is this discovery actually a "mothership" the size of the moon as the amateur UFOlogist who uncovered it claims or is this just a trick of the solar light?

Amazingly, the Christmas Eve discovery by UFO researcher Scott Waring marks the third bizarre sighting of a monstrous UFO around the sun in the year 2014. In October, the same NASA satellite, known as the Solar and Heliospheric Observatory, captured a similar, triangular UFO which appeared to be plunging directly toward the surface of the sun.

Waring is the editor of the popular site, UFO Sightings Daily, which provides one of the most thorough, ongoing catalogs of UFO sightings from around the world. But these puzzling images of what Waring says is a UFO mothership that is at least the size of Earth's moon — but may be the size of Earth itself — were uncovered by Waring himself. 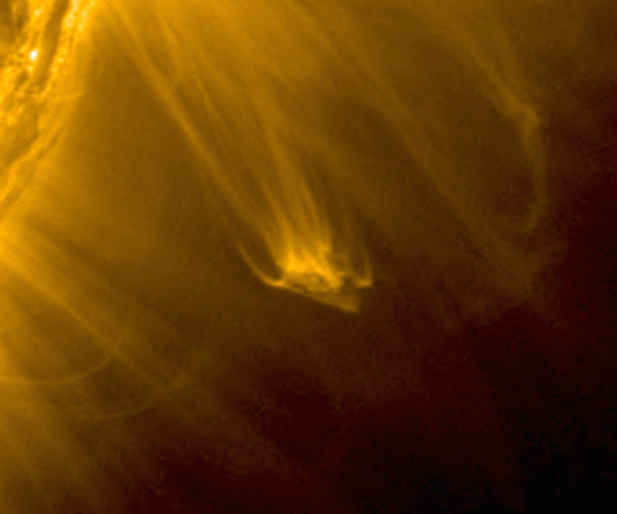 Thanks to NASA and its sun-watching satellite, you don't have to be a professional astronomer to view high-quality images of the sun and its constant activity. Waring spotted the UFO in these images by poring through images on the site Helioviewer.org, which makes imagery acquired by the NASA satellite available online.

The site also allows users to make their own videos of solar activity, which is how Waring created the above video in which he explains his analysis of the alleged UFO images.

"Was looking at the Helioviewer online and noticed this giant triangle UFO leaving our sun," Waring says on his UFO Sightings Daily blog. "It exit caused a massive solar explosion. I say in the video that the UFO is moon size, but in the lower left corner is the earths size...which is smaller than this mothership."

Of course, doubt, like beauty, is in the eye of the beholder. And while the solar images captured on Helioviewer.org are undeniably beautiful, astronomers have plenty of doubt as to whether they show actual alien mothership UFOs.

While the Christmas Eve UFO images have not yet generated a response from the professional scientific community, and NASA has a general policy of simply ignoring UFO sightings, astronomers dismissed the October images of a UFO around the sun as "cosmic rays."