Russia has finished a $103 million upgrade to its fleet of supersonic "Blackjack" bombers, bringing what was already considered the world's fastest nuclear bomber into the 21st century with new electronic systems that could give the 33-year-old Soviet-era planes an edge in the skies over the United States B1 "Lancer" bomber.

When the Tu-160, known to American military experts as "Blackjack," was introduced in 1981, the bomber was the crown jewel of the Soviet Union's Air Force. Following the collapse of the communist empire a decade later, many of the Blackjack bombers were destroyed as part of nuclear disarmament deals with the West.

But according to the online aviation journal Flightglobal, Russia has maintained a fleet of 13 Tu-160 nuclear-capable supersonic bombers — and has now upgraded them with state-of-the art radar and avionics systems, including an advanced, new missile targeting and navigation system that allows the plane to fire its missiles and nuclear weapons with a high degree of accuracy in any weather, and in night or daylight conditions.

Other estimates of the Russian Blackjack fleet hold that the country's air force has just 11 of the Tu-160 long-range bombers, and 10 of those received upgrades. 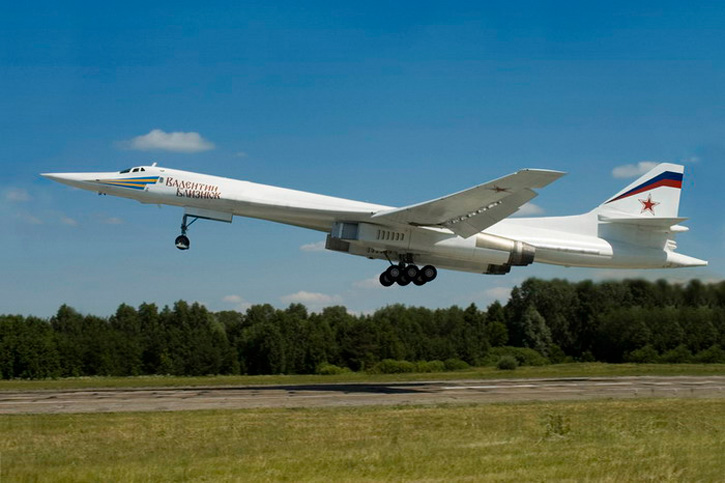 "Avionics" refers to all of an aircraft's electronic systems, including communications, navigation, the automatic pilot and literally hundreds of other specific functions on any plane.

Russia, however, is not done making improvements on its fleet of supersonic bombers. Coming up in 2016, the Tu-160 planes are scheduled to be fitted with NK-32M engines — which can power the Blackjack at speeds greater than 1,500 miles per hour when four of the engines are operational on the plane.

By contrast, the fastest commercial airliner — the new Boeing 787 Dreamliner — can travel at top speeds of just under 600 miles per hour. The now-defunct Concorde, the supersonic commercial transport airliner that could once take passengers from London to New York City in just three-and-a-half hours, flew at about 1,350 miles per hour.

Despite the upgrade of the Tu-160, the expected delivery of 55 brand new Sukhoi PAK-FA stealth fighters by 2020, and new fleet of sophisticated nuclear submarines — all part of a massive military buildup ordered by Russian President Vladimir Putin — adds to what the Russian leader maintains that his country's military policy is purely "defensive."

"The situation in the world around us is not becoming any simpler. You all know about the USA's plans to build a missile defense system," Putin told his Defense Military Board in an address last Friday. "NATO has stepped up its activity too, including in Europe, especially in Eastern Europe. In this respect, I want to say that our military doctrine nevertheless remains unchanged and is exclusively defensive in nature, as you know. But we will defend our country's security firmly and consistently."

The first test flight of the newly upgraded Blackjack bomber took off from Kazan airfield in Tatarstan in Russia on November 16.