12 Years A Slave is a story that proves the old adage, "better late than never." The hero of the true tale, Solomon Northup, endures, as the title says, 12 long years of captivity before finally winning his release from a hellish southern plantation. Now it appears that The New York Times has also taken the old saying to heart.

When the Times ran a story about Solomon Northup 161 years ago, the paper spelled his name wrong. Twice — two different ways. Today, the Times corrected its error.

The story, dated January 20, 1853, says something not only about slavery, but about the state of the New York Times proofreading department back then. The 12 Years A Slave protagonist, whose name is spelled "Northup," found himself identified as "Northrup" in the New York Times sub-headline, and "Northrop" in the body copy.

The headline of the story was simply, "The Kidnapping Case." The tale that it told was horrifying — and of course will be familiar to anyone who has seen 12 Years A Slave, the film that was adapted from Northup's memoir 160 years after its publication. 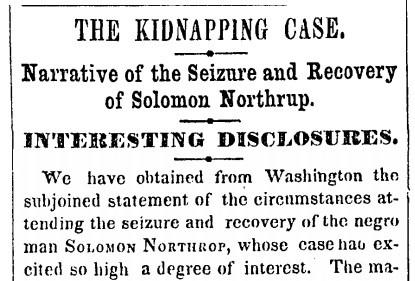 The Times described Northup's kidnapping, saying he was "snatched so villainous from the land of freedom, and compelled to undergo sufferings almost inconceivable in this land of heathenism, where slavery exists with features more revolting than those described in 'Uncle Tom's Cabin.' "

But it took the age of the internet and social media for the Times to finally spot its pre-Civil War faux pas. Or more precisely, the mistake was spotted for the Times, then brought to the paper's attention via a Twitter posting by author Rebecca Sloot.

Sloot herself placed a book on the New York Times Bestseller list in 2010, The Immortal Life Of Henrietta Lacks.

Oddly enough, Sloot's first Tweet pointing out the typo, itself contained a typo. She identified the year of the Times' 12 Years A Slave story as 1953 — which she quickly corrected to the accurate date 100 years earlier.

The New York Times, in issuing its rather belated correction, did get in a perhaps well-earned boast about its 1853 12 Years A Slave story, saying that at the time, the article was, "a more complete and authentic record than has yet appeared."