Kim Kardashian and finacé Kanye West, who is also the father of Kardashian’s child, North West, enjoyed some alone time in Paris this weekend — alone except for the horde of photographers who trail the couple everywhere. The pair were reportedly checking out possible wedding venues for their upcoming nuptials — one special, and especially extravagant venue in particular.

But the excitement must have clouded Kim Kardashian’s sartorial judgment as she stepped out for some shopping Monday morning in a figure-hugging black leather ensemble that led some in the press to label her a “fashion victim.”

Noting that both the Keeping Up With The Kardashians star and her Yeezus rapper husband-to-be have made millions with their own respective fashion lines, The Daily Mail‘s Colette Fahy remarked that Kim Kardashian “looked more fashion victim than designer as she stepped out in a leather pencil skirt, black top and floor length leather jacket with a fur collar.”

Here’s a pic of Kim Kardashian in the offending outfit. What do you think? Fahy also noted that despite wrapping herself up seemingly to shield against the chilly winter weather of Paris where temperatures topped out at 46 degrees fahrenheit today and then plummeted into the 30s, “Kim wore just a pair of strappy sandals on her feet as she made her way into a Tom Ford store, hopefully to buy herself a new outfit.”

So what brought Kim Kardashian and Kanye West to Paris in the first place, other than that for rich people like them, that’s just a thing? Ostensibly they were there for Paris Fashion Week. But in reality, Kardashionologists say, they were scouting wedding locales.

Namely, according to the “women’s interests” web site Bustle, they’re looking at the Palace of Versailles.

The lavish palace, located about a dozen miles outside of Paris, was home to the French kings from the mid 17th century until the French Revolution, which overthrew the monarchy, in 1789. The palace has come to symbolize the absolute power of self-proclaimed kings over the common people.

Kim Kardashian posted an Instagram photo of the palace, with herself and Kanye West barely visible in silhouette gazing up at it, over the weekend. 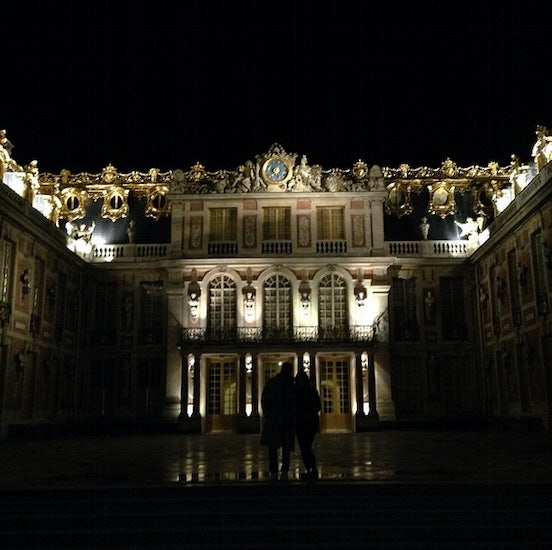 US Weekly had earlier reported that the famous couple were considering the palace as a location for their “private” wedding.

“Kanye has never been married and wants a big [wedding],” a source told the gossip mag. Another confidential informant told the publication, “they are not working with a budget.”

Neither was King Louis XVI, the final full-time resident of the palace who was deposed, arrested and guillotined in 1793.

While this would be the first marriage for the 36-year-old hip hop star, 33-year-old Kim Kardashian would be tying the knot for third time already. Her first marriage, to music producer Damon Thomas took place when she was 20 and lasted just four years.

But that was an eternity compared the second Kim Kardashian marriage, to NBA player Kris Humphries. That one fell apart after a quick 72 days.