Kim Kardashian is not like the rest of us. While most ordinary folks were likely relaxing on the weekend, wasting time with idle pursuits such as family and friends, really getting nothing accomplished, the 33-year-old reality TV star and Instagram queen was hard at work, keeping pace with the job requirements in her high-pressure profession of being seen.

At the same time, sources close to Kim Kardashian and her boyfriend-turned-fianceé, rapper Kanye West, leaked the possible location of the couple’s honeymoon following their planned nuptials later this year.

“Kanye is obsessed with space and anything sci-fi – he’s shot many spaceship-themed videos and he even considered training as an astronautical engineer,” said the source, quoted on the ShowBiz Spy web site. “Now he’s fixated on the idea of honeymooning in space.”

Reportedly West had his eye on the planned inflatable CSS Skywalker Space Station, which will orbit 250 miles over Planet Earth starting in 2015 if all goes according to plan. Visits by the public would cost about $1 million per night and require three months of training.

Some of the curvaceous Kardshian’s other weekend activities included not attending Sunday night’s Golden Glove Awards, preferring a dinner out with West at a celebrity-studded Beverly Hills eatery, a mysterious doctor’s visit, and inflicting damage on a car parked next to theirs.

Since bearing her first and, as far as the public is aware, only child six months ago, Kim Kardashian has appeared obsessed with showing off her return to her pre-pregnancy figure.

The latest installment in her campaign came Saturday when she posted the above snap to her already overstuffed Instagram account.

While ostensibly a shot showing off the Kardashian clan’s four black luxury vehicles, including West’s own Lamborghini seen directly behind Kardashian, the true attention-getter of the long-distance selfie was judged by observers to be the famous Kim Kardashian derriere, clearly on display beneath her black dress.

Kardashian “has been working hard to shed her pregnancy weight since giving birth in June 2013 and wants the world (or her 12 million plus followers) to know,” declared US Magazine. “After posting a booty shot in her workout clothes last week with friend Blac Chyna and another with sister Kendall Jenner while working out on Friday, Kardashian slipped into a sleek black gown for her latest selfie.”

That was Saturday night. No word on exactly what happened on the “date” with West, but Sunday morning, sharp eyes at the Just Jared gossip site spotted Kim Kardsahian slipping out of a doctor’s visit at the Beverly Hills Medical Center. 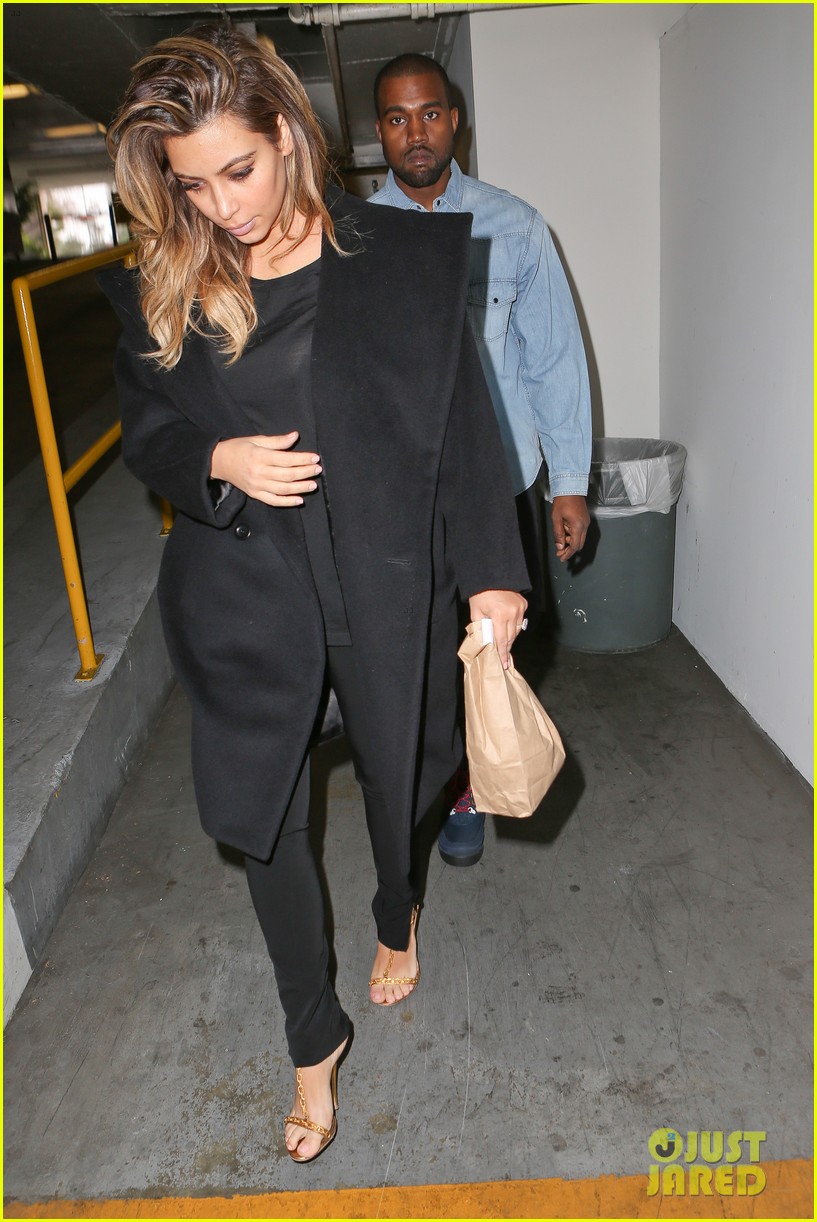 As the photo shows, Kardashian was clutching something concealed in a brown paper bag, presumably some sort of prescription medication.

Kim seemed fine, however, and Kanye then took her to brunch — but not before scraping another vehicle when he opened the door of his Lamborghini. Kim Kardashian took a moment to inspect the damage, but apparently the couple did not leave a note for the other vehicle-owner. So the scrape couldn’t have been too severe.

Finally, when everyone expected the power couple to walk the Red Carpet at Sunday night’s Golden Globe Awards, Kim Kardashian and Kanye West instead opted for a quiet dinner at Mr. Chow’s.

The high-end Chinese eatery in Beverly Hills has been a hangout for Hollywood’s glamor set since in opened in 1974. But turning up her nose at the Globes didn’t stop Kim Kardashian from donning another, figure-flaunting ensemble.

Chelsea Handler, 45, Shows Off Her Booty In A Thong While Hanging With Legs Apart January 15, 2021

Paulina Gretzky Teases Cleavage In Unzipped Snow Jumpsuit: ‘Some People Are Worth Melting For’ January 15, 2021

Kelsie Jean Smeby Heats Up Instagram While Posing On The Ground While Wearing All White January 15, 2021

British Royals Meghan Markle Is Reportedly Freaking Out About Her Half-Sister’s New Memoir: She’s ‘Sick To Her Stomach’