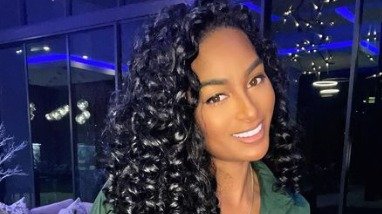 NFL linebacker Philip Wheeler and his wife Ashley Nicole turned up the heat this summer as their son left home on vacation. The WAGS Miami star confirmed she and Wheeler "didn't know how to act" following their son's departure, so they got frisky in the club. The couple posted up kissing Nicole wearing an all-leather outfit and Wheeler toning down her vixen look with ripped denim pants and a polka-dotted shirt.

The realtor, who dubbed herself as an "NFL Wife" in her IG bio, showed off her impressive washboard body in a floral print bikini with a complimentary wide-brimmed orange hat. Her long black hair fell to her back in a straight style while the hat's brim covered half of her face leaving only the lips exposed. Nicole credited her husband for the perfect shot, saying he learned her angles and positions. She also called it a Pro Tip for marriage.

Getting Her Body Into Shape

It's no coincidence that Nicole's body is perfect for the summer as she put in the work long before the season changed. The realtor spent days in the gym whipping her body into shape with full-body workout exercises, from running on the treadmill to squatting with weights, doing pull-ups, mountain climbers, and more.

Nicole also adjusted her diet and incorporated more healthy choices into her meal plans. Last year, the fitness enthusiast and her husband, opened a healthy food restaurant, Raw Juice, in Pembroke Pines. They sell acai bowls (fruits and nuts salads) and freshly pressed fruit juices and have received glowering reviews from returning customers. They also launched an app for easy orders and delivery.

On their anniversary, Nicole shared a video compilation of many of their moments over the years, saying she was down to ride with Wheeler till the end. The beautiful couple married in 2017 after dating for about 7 years. They had Deuce, their son whom they love deeply, shortly after marriage.

Although Wheeler is less open about his marriage on the internet, he shows appreciation for his family via his Instagram posts. In 2020, he wished his stunning wife a happy mother's day with three pictures of her in a sexy black lace bikini, a mesh cutout one-piece, and a white floral bikini. However, with how unchanged Nicole looks, you would think she took those photos this year, but for the last slide featuring Deuce as a toddler.